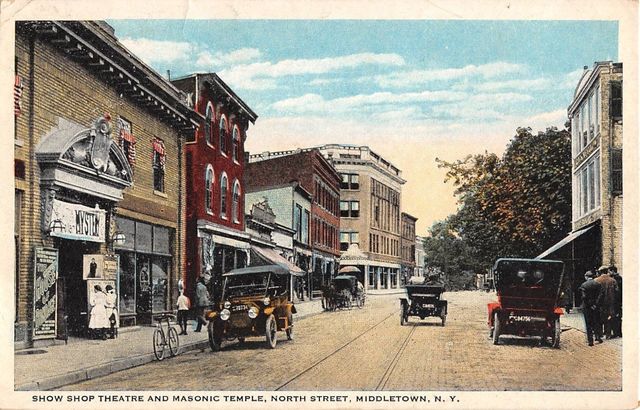 The Alhambra Theatre was opened September 17, 1913. It was built as a vaudeville theatre, and was operated by O.S. Hathaway. it was listed in the American Motion Picture Directory 1914-1915. In early-October 1916 it was renamed Show Shop Theatre. It was still open in use as a live theatre in 1936.

Probably built in 1913, which is the date over the entrance.

CinemaTour says the Stratton Theatre opened on February 22, 1892, closed in 1949, and was demolished in 1953. It was designed by architect James E. Mapes. Casino must have been its opening name, as I’ve found mentions of that name from 1893 and 1897. Most likely the Stratton is not listed in the 1914-1915 American Motion Picture Directory because it was still a legitimate house at that time.

CinemaTour says the Alhambra opened on September 17, 1913, and was designed by architect Edwin P Valkenburgh. The closing date is unknown, but the building is still standing, occupied by a Pentacostal church.

The Alhambra had 800 seats in 1916, according to an item in the April 8 issue of Motography that year. This web page has a small photo of the Alhambra dated October, 1913. The name change from Alhambra to Show Shop was mentioned in the September 26, 1916 issue of the Middletown Times-Press, which said the house would reopen under its new name the next week.

FDY’s listings for New York State are a pig’s breakfast all through the 1920s, and I can’t even find Middletown listed until 1930, when the only theaters listed are the State and the Stratton. Although the Show Shop is never listed in the FDY, the building was still usable as a theater at least as late as 1936, when the Times-Press noted it as the venue of a minstrel show put on by the local fire department. I don’t find any evidence that it was operating regularly as a movie house by that time, though.