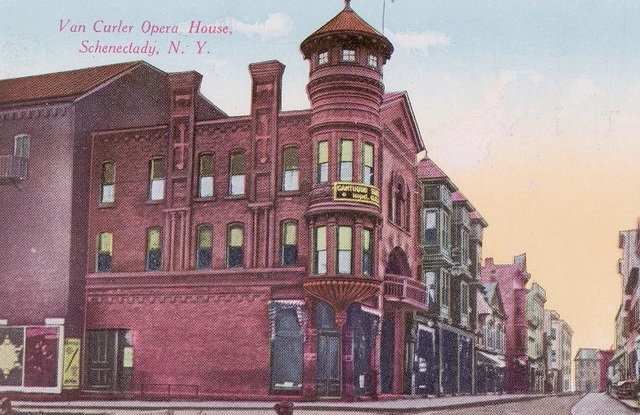 Opened on March 1, 1893 as the Van Curler Opera House. The Van Curler Theatre is listed in the 1941 & 1943 editions of Film Daily Yearbook, as being in the stock of theatres owned or operated by the Fabian Theaters chain, although they had closed the theatre around 1940. It was demolished in 1943.

The theater was not located on Van Curler Street, but in downtown Schenectady on Jay Street at the corner of Franklin Street. The article has two photos. The front of the theater was a typically Victorian assemblage of Moorish and Classical elements with a Queen Anne style tower of bay windows and belfry stuck onto one corner.

The Van Curler Opera House is on a list of theaters designed by Leon H. Lempert & Son that was published in the 1906-1907 Cahn guide.