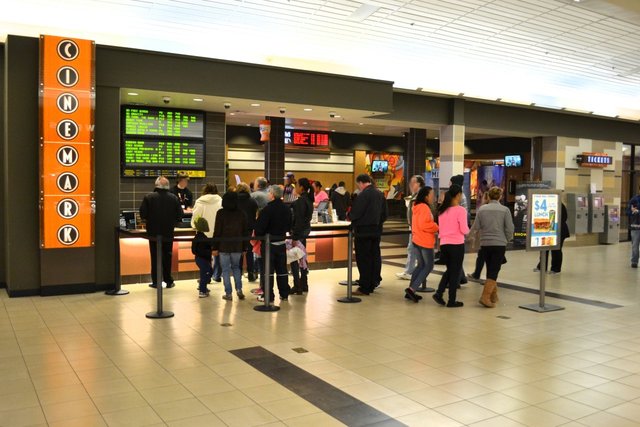 Opened November 4, 2011, this theater replaces the original AMC Loews Stroud Mall 7. This is the closest Cinemark theater near the NYC Metro area. Stadium seating in every screen, digital projection, and one Cinemark XD Screen are the amenities of this theater.

Most of cinemas are rather small except XD screen. The range from 154 to 79. This theater had to fit to the contoir of the mall. I wish it was free standing. I hope Cinemark will go further east in the furture

so tiny compared to rockaway.

I forgot to comment on this place – I went opening weekend and the place was, well – what it was. 12 screens all down one hallway (with a restroom right in front by the lobby) and a concession stand serving pretty much the basics. The theaters were small with very large screens (I was in a traditional theatre, I opted not to see Tower Heist in XD) and the theater lacks proper masking for scope films! The lame answer I got from the manager was “since most movies are made in flat, our new builds don’t have masking for scope which is why it’s letterboxed” – – uhhhh, that’s actually not correct, I’d say it’s about half and half on the production side for scope vs. flat features – so instead of screaming “ultra high tech” this place seems cheap. Unfortunately I was the only one bothered by this. The other aspects of the presentation and sound were good however.

I know Rockaway does a good job of masking for scope movies lately ever since they converted all of their screens to digital.

Believe it or not, AMC Rockaway is not the best movie theatre USA, world or even New Jersey for that matter.

Coming to this theater for one night only….http://bit.ly/HDOmnv

This theater is the closest to where I live that has a THX certified cinema for XD screen. The other theater? Tribeca Screening Room in NYC.

There has been a Cinemark Theatre in Hazlet NJ for a number of years now. About 55 miles from NYC. And in a few short weeks the Cinemark in Watchung NJ about 20 miles from NYC will be opening.

I came north from Allentown PA to see two of the sailor Moon films here and after being in this theater I wish they would fill in North from Philadelphia and south from Stroudsburg.