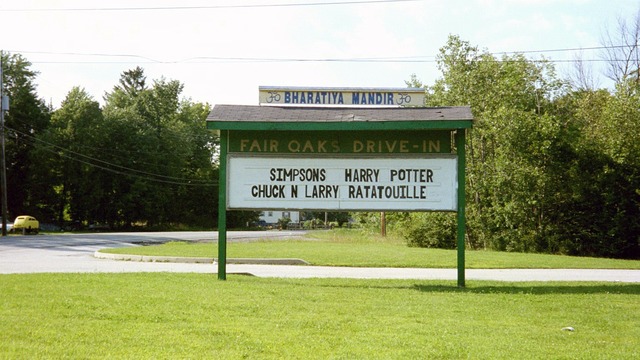 Opened on May 15, 1970 with Johnny Cash in “Johnny Cash! The Man, His World, His Music” & Elvis Presley in “The Trouble With Girls”. The Fair Oaks Drive-In was closed in 1981. It reopened in 1990 and closed at the end of the 2013 season. It was hoped to install digital projection equipment, and planned to reopen in April 2014, but a dispute with the landowners prevented this from happening. It reopened for the 2015 season April-October.

Fair Oaks Drive-In will reopen for 2015.

A small group of fans of this theater is planning a party at this theater in July. You are invited. Lots of details at the link below:

The Drive In is open now, weekends at this point, planned for full time when schools are out for summer vacation in June. Wonderful article in the local paper… http://www.recordonline.com/article/20150522/NEWS/150529715/0/SEARCH

This is great news.

Multiple sources online say the Fair Oaks opened in 1970 as a single screen. The first newspaper ad I could find that mentioned it was in 1972.

In August 1976, owner E.J. Taylor became an ordained minister of the Universal Life Church and planned to seek a tax exemption “as soon as I can do it.”

I don’t think the Fair Oaks ever made it into the International Motion Picture Almanacs' lists. Perhaps it was overshadowed by the Middletown Drive-In, also owned by Taylor.

The Fair Oaks was still open and advertising in September 1981. The story is that it closed after that season.

A May 2000 article in The New York Post said that Ron Mege had “operated the Fair Oaks since 1991”. The Times Herald-Record of Middletown wrote in May 2016 that “Ron Mege, who ran the theater from 1990 to 2013” was returning to restore and reopen the Fair Oaks again.

Between the Mege administrations, there was a year or two of some shenanigans and legal issues. The drive-in was closed in 2014. It reopened in May 2015 thanks to another couple who apparently brought a digital projector with them from a Vermont drive-in. That couple was later sued by the Vermont Attorney General’s office for allegedly “making deceptive representations in connection with a fundraiser.” They denied wrongdoing, and I don’t know the status of that lawsuit.

Mege had apparently added a second screen during his first tour of duty, but the Fair Oaks operated recently with just one active screen. They added a second digital projector in June 2017, and both screens are active again.

Somebody at the Fair Oaks, possibly Mege, got misinformed about the opening date. A 2001 article in the Times Herald-Record said “Then in 1990, (Ron Mege) took on the ruins of Fair Oaks. Built in 1967, it closed in 1981. Mege started with nothing but bare walls. He built the projection equipment, rewired the place, even built one of the screens himself.”

The trouble with that is the 1968 photo of the location on Historic Aerials showing no trace of a drive-in at the time. So it looks like we can trust New York Drive-Ins‘ newspaper ads for the Gala Opening of the All New Fair Oaks in May 1970.

The Main original screen is one of the largest in New York State.Good turn out for the summer of 2022. Delicious fresh cheeseburgers crinkle cut french fries very friendly staff