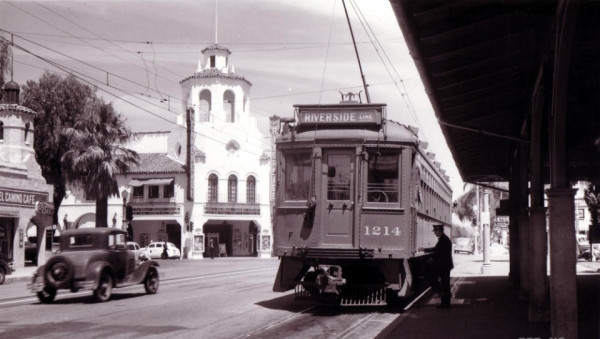 The Riverside Theatre opened on June 11, 1929 with “White Shadows in the South Seas” starring Monte Blue & Raquel Torres. Film star Monte Blue appeared in person, and the Wurlitzer 2 manual 10 ranks organ was opened by Warren Wright. With a seating capacity of 1,550 in orchestra and balcony levels, it was built for vaudeville and movies by Fox West Coast Theatres.

In 1939, the Fox Riverside Theatre held the first public sneak preview screening of “Gone With the Wind”, and Vivian Leigh made a personal appearance. Over the following years, the theatre was often used by the film studios as a sneak preview theatre for forthcoming major films and a sign on the front of the theatre would be illuminated to notify when one was to take place.

In 1942, the stage house was sealed off from the main theatre, and was converted into a second movie theatre to the plans of Clifford Balch. It had its own entrance at the rear of the building, and was named the Lido Theatre.

During its last gasps of life, the Fox Theater was exhibiting Spanish language films and the Lido Theatre had become an adult movie theatre as part of the Pussycat Theatres chain. Both finally succumbed to economic pressure and were closed in around 1992. The building stood empty and unused, the victim of thieves and vandals for many years.

In 2001, the abandoned theatre was purchased by a local individual, with plans proposed for a renovation, but years past by, and nothing happened. It was purchased by the city in 2006, and in 2009, the city spent 32 million Dollars to restore the theater back to a single space, with a working stage. It now has 1,646 seats. with 971 in the orchestra, 234 in the mezzanine and 441 in the balcony. The program includes touring Broadway shows.

It reopened on January 15, 2010 as the Fox Performing Arts Center, and presents live performances, live theater and Classic movies. The Nederlander Organisation have a five year lease on the theatre and they will book three to five shows a year, but not concerts or other events.

I was just looking at my photo of a cultural heritage landmark plaque on the side of this building. It refers to the architects as “Batch and Stanberry” — they misspelled both of their names!

Good to see that its reopened.

Loved, loved, LOVED getting to see Gone With The Wind in the theater last weekend. I really hope they screen more old movies in the future. What a great date night!!

I must say, though I’ve only seen the theatre with one of the new vertical signs in place, that the building looks ten times better — and actually functional.

Two photos I took of the Fox this week:
View link
View link

Congrats about the reopening… the creep who ruined that beautiful theater should be fined for destruction and theft of “public” property and confined to a mental institute.

It seems that the original estimate of about $30m went to $40m, wow!

After seeing the photo of the “copper” ticket, I wonder if the “brass” plaque regarding the original screening of GWTW is still on the facade? Glad I took a snapshot of that.

This was THE theater for movies in the 60s. I loved going to this theater as a kid. I’m really glad the city has given it new life.

On September 9, 1939, a secretive “sneak preview” of Gone with the Wind is shown to a surprised audience in Riverside, CA months before its official premier in Atlanta. The film’s producer, David O. Selznick, his wife, Irene, investor John “Jock” Whitney and film editor Hal Kern drove to Riverside to preview the film at the Fox Theatre. It was still a rough cut at this stage, missing completed titles and lacking special optical effects, and it ran for four hours and twenty-five minutes (it would later be cut down to under four hours for its proper release). A double bill of Hawaiian Nights and Beau Geste was playing at the Fox, but after the first feature it was announced that the theater would be screening a preview. The audience was informed they could leave but they would not be readmitted once the film had begun, nor would phone calls be allowed once the theater had been sealed. When the title appeared on the screen the audience cheered (many had been reading about the making of the film for over two years), and after it finished it received a standing ovation. Here’s the Fox Theater in 1929.