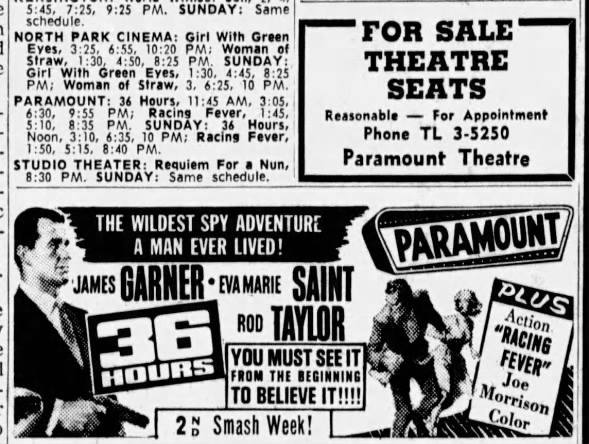 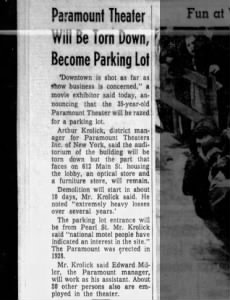 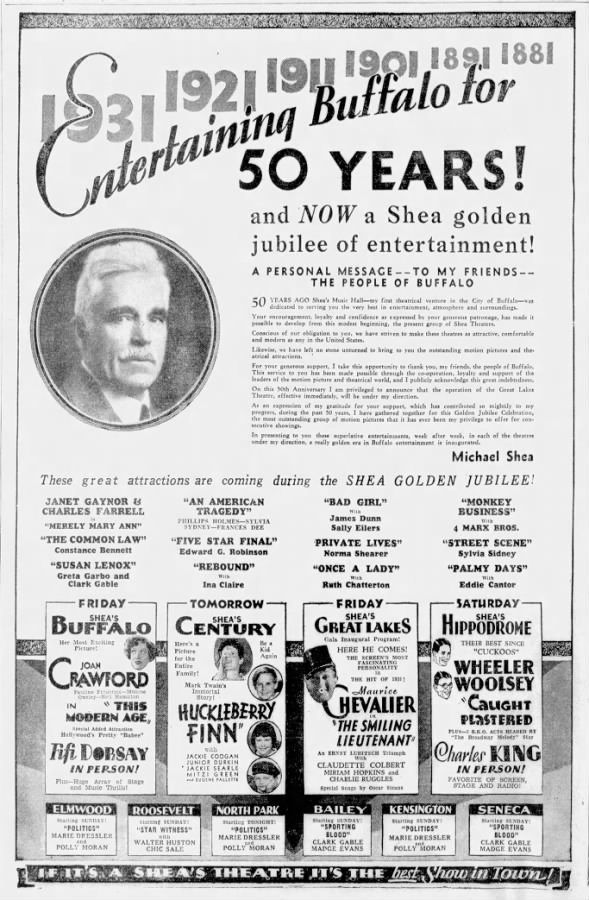 The Great Lakes Theater launched with William Fox in the house. on May 30, 1927 opening with George O'Brien in “Is Zat So?” supported by a Fox newsreel and various Amalgamated Vaudeville acts. Opening ad in photos along with an ad for its Wurlitzer organ.

Paramount and other theatres in this link.

The name Great Lakes was selected in a contest and the winners split a cash prize.

The theater auditorium was demolished, however, the ticket lobby, the booth, and the stair hall were intact behind plywood until 1980s years after the auditorium fell. The booth was removed to a restaurant in the building abutting Sheas. The transom glass, lobby chandelier, wall sconces left about the same time. All decorative parts were taken out before the condo conversion

Just an update on this theatre’s Wurlitzer Opus 1616 shipped from the Wurlitzer factory in April 1927. This instrument passed to at least 2 other owners before being purchased in 2013 and shipped to FL for installation in a private residence. All original pipework has been retained. The unique console (with typewriter keys for the sound effects) was long gone before the organ was purchased by the new owners. I was told that the blower was started for the first this Sunday March 2nd and that the instrument will be playing before too long.

Found a great article about the theater (with interior photo!). Here is the link:

Its actually in nice shape, quite the conversation piece.

Some of the workers involved the in demolition many years ago salvaged one of the 35mm projectors, at this writing it sits in my dining room.

Your wife must be thrilled!

I have done a lot of work on the building; reading the comments has put a lot of pieces of the puzzle together for me. The original framework still stands, as do the arched window openings facing Main St. The interior was demolished when the furniture company took over the entire space after the the Paramount closed, and a steel structure was erected to place floors in the large void left by the auditorium. When City Centre condos were built in the early 90s, the steel structure was reinforced to support the addition of four more stories. Then the whole exterior was re-skinned. Examining the steel and concrete on the middle floors, there are still ancient electrical conduits and fixture boxes from the theatre/warehouse days.

Some of the workers involved the in demolition many years ago salvaged one of the 35mm projectors, at this writing it sits in my dining room.

From the late 1950s a photo postcard view of downtown Buffalo that captured a view of the Paramount and Buffalo Theatres.

Click here for a photograph taken of Foxâ€™s Great Lakes (Paramount) Theatre in 1931 by George Mann of the comedy dance team, Barto & Mann.

More Paramount information. While Fox and Loews originally ran this theater, Micheal Shea, with
Paramount as a partner took over in 1931. At this point Shea had an interest in all the major
downtown theaters, except the Lafayette. In early 1934 the Great Lakes went dark. Other
operators couldn’t get the theater reopened (claiming Shea monopolized the product) and
Sheas under Vincent McFaul (Shea died in 1935), reopened that year, and stayed under that
management until 1949. The theater breakup in 1949, gave the Great Lakes to Paramount, and
also the name change. In 1951, Edward Miller began managing the Paramount, and did so
until the end in 1965. 51 people saw the last show in the 3300 seat theater on February 20,
1965.
Some other data, a furniture store occupied the upper levels for most years. A silent theater
for only one year, the “Jazz Singer” debuted in 1928. Vaudeville was ended in 1932. AC installed
in 1936. Admission dropped as low as 25 cents in the 1930s, but was up to 65 cents in 1945.
“Gone with the WInd” showed here in 1940 at $1.10 per seat. Dennis Day was brought in,
to open the “New” Paramount in 1949. 75,000 pairs of 3-D glasses were obtained for the
showing of “House of Wax”, which was 2nd only to GWTW for attendance.

As a late comer to this theatre listing, I’ve just finished reading through all the posts, and noticed this question:

“I have no idea what could have been on the upper floors of this building when it was a theater.”

Does anyone know or have any ideas?

Unless I missed an answer post… I wish to point out that the answer to that question is shown in the 1964 photograph posted by Lost Memory on April 17th, 2009.

If you study that photograph, you will see that the Nemmer Furniture store occupied the left side on the ground floor even when the theatre was operating. Their sign on the front of the building just to the left of the Paramount marquee says: 9 Floors of Furniture. That pretty well says it all. They occupied all of the front building except the theatre entrance and lobby. When the theatre closed they apparently expanded into that space as well.

Hi alknobloch. There is a Yahoo users group for Buffalo movies theater aficionados but not much of interest is posted there. I don’t remember the peanut cart but it sounds wonderful. Most of my recollections center around special events and openings with celebrities. Also I had a great collection of 8x10 stills from my favorite war, western and SF movies. As I remember each local or regional theater chain was responsible for advertising and promotions. My father coordinated directly with the studio PR reps to set up the local opening event. At the time Ed “Kookie” Burns (of 77 sun set strip fame) generated more buzz than John Wayne.

Thanks a lot for the info Jeff – if you have any other recollections of the local theaters that I’ve commented on, please share. Maybe we can start a group of locals to reflect on personal movie house memories as well as technical ones.

The only other ‘near’ Paramont story I can come up with is the local “Peanut Man” that used to ply the corners of Main Street around the theaters with his pushcart selling hot nuts to passerbys. The cart used steam to power a whistle as an attention getter and — I believe — in the really early days he actually had a live monkey on his shoulder!

Try that one today on nearly deserted Main Street as the semi-subway cars rumble by!!!!

Just to confirm, according to
View link

The closing date jives with my recollection of our family moving in early August, 1965. For company info see:
View link

The Century Theater had the Three Stooges on stage for the opening of one of their feature films, it might have been The Three Stooges in Outer Space or something to that effect. I had the pleasure of meeting them after and hanging around while they were being interviewed and photographed and fed. The magic shop was likely Gene Gordon’s Shop of Magic on Franklin St. (found a reference to it on the internet). Gordon was apparently a gifted magician but is better known as brilliant innovator who created and marketed many effects.

Good memory Jeff – the days of Joey Reynolds and Daffy Dan Neverath were legend at KB radio! Don’t know of that magic ship, however — it sorta sounded like a interesting place given the politics in Buffalo at the time.

Although the Paramount was known for a few events like the Beatles concert, my main memories are of the old Century Theater after Harvey and Corkey took it over and held their rock concerts there. To think that they started off at the University of Buffalo with gigs and today it’s Miramax ——–

Hi alknobloch. I was 12 when the theater closed and we moved. I was the resident theater brat sometimes after school but usually every weekend and all the time over the summer. I don’t know what happened to the projectors. I remember many special events like a closed circuit Beatles concert in 1964 I think. Remember WKBW and Joey Reynolds – he hosted the event. There used to be a mesmerizing professional magic shop on the street behind the theater. Above the shop was a 50 seat screening room with a bar. Every Friday afternoon the mayor (Sedida?), chief of police, rabbis, monsignors etc. gathered to preview a film, drink & smoke cigars and schmooze. Occasionally I got to go too.

Hey Jeff, you may have been one of the staff who chased me through the theater when, as a kid, I accidentally opened a side fire escape door while trying to find the restroom during an afternoon showing of a Jerry Lewis film! (they never caught me, by the way…)

Since you were into the projection, do you have any idea what happened to the VistaVision projectors they used to have. I recall that was a big selling point back in the early days of the “Hi-Fi” craze as Paramount would proudly advertise their pictures in this new process of “Motion Picture High Fidelity”.

My father was the general manager for Paramount Theaters in Buffalo and Rochester. I grew up in that theater and had free reign from the projection booth where I would help the projectionist strike the arc and cue the reels to behind the screen. As I remember, the Paramount in Buffalo was closed in 1965 (the parent company got out of the western NY market and we relocated). I have many photos of stars in attendance for the opening nights of their film’s debut at the Paramount (Jimmy Stewart, John Wayne, Van Hefflin, Ward Bond etc.) And the refrigerated air and popcorn smell was
irresistible!