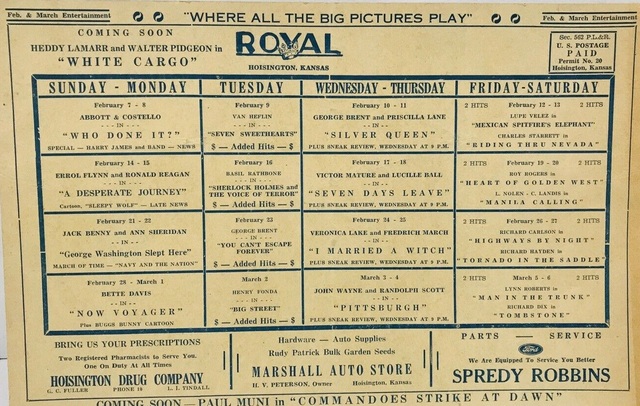 The Royal Theatre was opened in 1916 by 1941 it was operated by Commonwealth Amusement. They were still operating the Royal Theatre in early-February 1960 when it was closed.

The Royal Theatre was mentioned in the January 26, 1924, issue of The Reel Journal, which said that it was the only theater still operating in Hoisington following the closure of the Crystal Theatre, which was being dismantled for other uses.

I worked at this theatre from 1956-1958 as a projectionist. It was still operational when I left. Commonwealth Amusement Corp. closed it some time later. It was totally destroyed by fire in the 1970’s. At the time I worked there it was open during the school year and closed during the summer when the Cheyenne Drive-In was open.

The Strand is one of about 200 locations mentioned in an ad for Reproduco Pipe Organs.

This sounds like the end. From the Feb. 8, 1960 issue of BoxOffice: “The Royal Theatre, Commonwealth house in Hoisington, has been closed because of a lack of patronage. Elden Harwood, area coordinator for Commonwealth Theatres, said despite the national trend upward in movie attendance, patronage at the Royal has not been sufficient to keep it open. Commonwealth will continue to operate the drive-in south of town and will reopen it for the season in the early spring.”