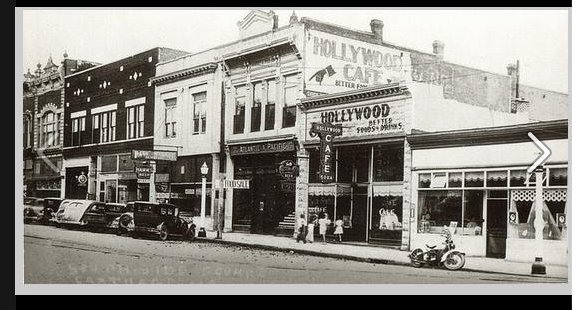 The Royal Theatre was opened by 1926. It was a small one screen theatre which replaced the original adjacent Delphus Theatre in August 1934. By 1948 it was renamed Roxy Theatre. It was open through 1964 when it was sold to Dickinson Theatres chain. It was destroyed in a fire on November 3, 1972.

I shared this info with the Powers Museum of Carthage, Missouri.

I see that the ad for the Photoplay spells the co-owner’s name McDurmeit. As the standard spelling of that surname is McDermeit, I had thought that MPW might have made a typo, but a local ad with that spelling suggests that he did use a variant spelling of his name. Other sources do use McDermeit, though, including an item in the September 25, 1915, issue of The Billboard which said that Ben and Porter Blackford had bought the Photoplay Theatre in Carthage from James A. McDermeit.

As the Roxy probably was the same house as the earlier Delphus Theatre, I’ll put this item from The Nickelodeon of May, 1909, here:

“Carthage, Mo. — I. P. Williams of this city and C. O. Williams of Webb City, owners of the Delphos [sic] Theater here, will conduct a moving picture theater at the corner of Fourth and Lincoln.”

I believe Fourth and Lincoln was the location of the Grand Opera House, so the Williamses might have been leasing the Opera House for showing movies.

This earlier comment by jsheehy454 cites a 1914 death certificate mentioning the Hippodrome Theatre at Fourth and Lincoln, so I think Hippodrome might have been an aka for the Grand Opera House.

The 1913 Airdome built behind the Delphus Theatre was to be called the Delphus Hippodrome, according to the MPW item I cited in this comment. That item names one of the operators of the Delphus as J. P. Williams (the J was most likely a typo that should have been an I.) It looks like Williams might have used the name Hippodrome at two different theaters in Carthage.

You are right about the Grand Opera house. It is on the 1909 Sanborn map. I read that it burned at some time and is now a vacant lot.

Thanks to all for the photos and comments. comparing google street view with some of the old photos taken on the streets it is easier to visualize where the theaters may have been. The one photo of the Roxy seems to have been showing the movie “Fall of the Roman Empire” 1964 from IMDB. I had found this same photo in the CHS school yearbook ad’s.

Does anyone remember what the Roxy looked like inside?
Where was the snack bar, How many isles, etc.

you went in the door after getting your ticket outside from the booth, it had a small snack bar with popcorn on the right side but have no memories of what the theater looked like inside except it was plain walls and always seemed dark.

William Bradfield owned the Roxy from at least 1948 (when a note in The Exhibitor called it the Roxy) to December 1963, when he sold it along with two drive-ins to Dickinson Theatres, effective April 1964.