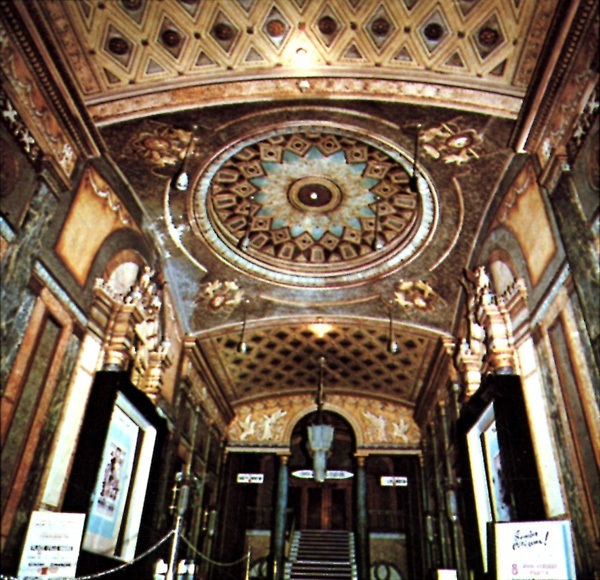 The Capitol Theatre opened on 2nd April 1921 for the Famous Players circuit. The opening programme had Cecil B. DeMilles motion picture “Forbidden Fruit” starring Agnes Ayers as the main attraction. It could originally seat over 2,600 (seating was somewhat reduced a couple decades later) and was one of the most grandiose and luxurious theatres ever built in Montréal. It was called "Canada’s Greatest Playhouse" in opening day newspaper advertisements.

A main feature of the auditorium was the elaborate coffered ceiling, together with giant Corinthian columns lining the walls. It was equipped with a Warren organ which had a 4 manual console and 28 ranks of pipes. An unusual feature was the organ pipes set into the alcoves above the box seats on the side-walls.

By the1950’s, it had become a roadshow house with long runs of blockbuster epics. For instance, "The Ten Commandments" ran for more than a year in 1956-57. Air conditioning was installed during this period of time.

The Capitol Theatre was closed and later razed in 1973, to make way for an office building.

Designed by Thomas Lamb’s Toronto office, built by Nathan Louis Nathanson (first general manager of Famous Players Canadian Corp.) and opened April 2, 1921 with the film “Forbidden Fruit”. Although still in original condition and showing films, the theatre was demolished on October 1973 along with the Strand-built 1912 (renamed Pigalle and seen on the right of the photo above) just a few doors away.

From the early 1970s, a postcard view of the Capitol Theater in Montreal.

It is too bad this grand cinema was torn down. I read that people tried to save it, but Mayor Jean Drapeau only cared about buildings in Old Montreal. Would be amazing if it was still in operation today. I was 10 months old when it was torn down, so I never went!

A link to a picture of the theatre’s interior

Today I was a tourist in my own town. The old Capitol Theatre was not completely demolished as I found out on a tour of the Mansfield Club. I worked for the caterer who closed the theatre with a huge party and auction of artifacts. Much to my surprise health buffs can pump iron or ride their bicycles in front of the old stage and backdrop in all of its glory!

Actually Wami that would be the old Loews Theatre where the Mansfield Club is used today.

N. L. Nathanson was the PRESIDENT and co-founder of Famous Players Canadian Corporation. Thomas Lamb architect did NOT have a Toronto office. I believe he worked out of New York. The Capitol Theatre in Montreal was a movie palace in every way.