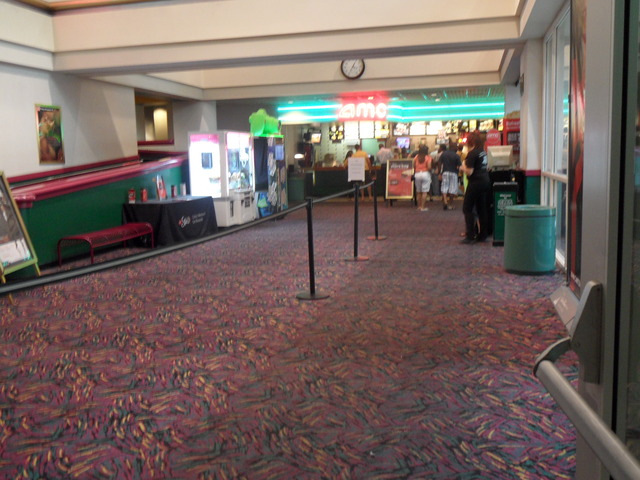 Purpose-built multiplex situated on the upper floor of the Rivercentre shopping mall. Planned by the Rand Theatres circuit, the AMC Rivercenter 9 was opened on June 22, 1990. In 2012 the IMAX screen at the other end of the mall was added plus another screen.

I went here with a colleague of mine. Seems to be an okay place to see a show.

AMC is just doing that to all of their non-stadium locations with competition. Don’t know that it matters if that competition was Alamo or not.

This has two IMAX screens. The larger one is full-size but only has a 2K digital projector and shows Hollywood movies. The smaller one is still full-size in terms of shape but “only” 70 feet wide. It is still equipped with a film projector but seems to show literally nothing but an IMAX short film about the Alamo.

The AMC Rivercenter 9 opened on June 22nd, 1990 ending the first-run monopoly enjoyed by Santikos theatres, who bought at least 6 pages of ads promoting that their chain had THX, Dolby SR, 70MM, etc. that AMC lacked. Grand opening ads posted. In 2012 the IMAX theatre was integrated with one more screen added.

It should be noted that AMC purchased the Alamo IMAX at the other end of the mall. AMC includes the IMAX in the name and ticketing on the website, but they are two separate facilities. AMC did not add an IMAX to the existing location like AMC traditionally does in its theatres.

Announced as the Rand Theaters Rivercenter Mall 9 in 1989, the project was one of the fledgling circuit’s most ambitious projects. The mall had launched with an IMAX theater in 1988. Dillards had purhcased the existing former Joske’s Department Store during the mall’s construction deciding to take just a portion of the future anchor. Tony Rand’s company took an upper portion for the multiplex.

But Rand was making national news for all of the wrong reasons that year and it was the Rand Nakoma 8 elsewhere in San Antonio that brought the circuit to an end with tales of shady business practices that landed him in jail. Fortunately, AMC stepped into the unfinished project and completed what would become a successful theater that continued into the 2020s with the circuit operating both the IMAX and the multi-screen theater.

Article from the San Antonio Light from May 24th, 1989 mentioned that Rand was to have 7 cinema complexes in the area.