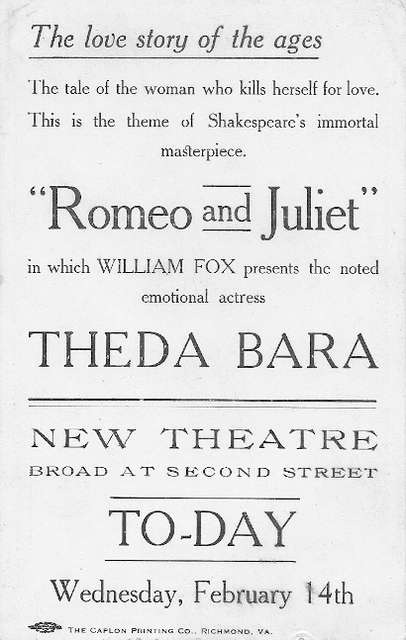 A permit for a “New Theatre” for Mr. B. Bear was issued in 1914. The location given is the north side of Broad Street between 2nd and 3rd. The architect of record was William C. West, but a drawing of the house exists labeled “New Theatre for Mr. M. F. Hofheimer, Richmond Va., Designed by Atlantic Terra Cotta Company, 1170 Broadway New York.” It is presumed that Bear obtained the drawing from Hofheimer after the latter abandoned the project, and had West design the rest of the building.

The New Theatre was taken over by Jake Wells in March, 1919. The New was one of ten Richmond houses Wells controlled during the late 1910s. A history of Jake Wells' theatrical enterprises gives the address of the New Theatre as 206 E. Broad Street, which would place it in the City Center District, not the Monroe Ward.