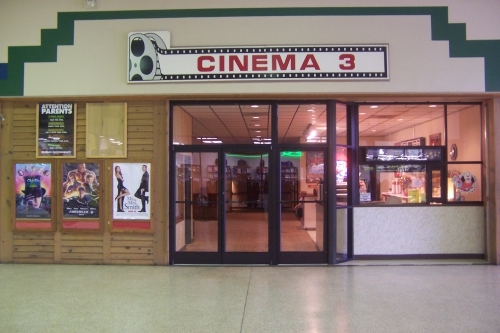 The Parkhill Cinema is accessed from the Western Boulevard side of the mall through the former Kmart entrance.

This theater is currently struggling to stay in business, being the only tenant inside the mall. There has been talk recently of turning the mall interior into a charter school; if this comes to pass, the Parkhill Cinema’s days may be numbered.

The charter school chose to locate further down on Howard Avenue; the Parkhill Cinema survives for now. Its fate may ultimately be decided by the film industry’s conversion to digital-only exhibition.

As far as I can remember the Parkhill Cinema was always an independent – I don’t know of any S&E theater having a video store in its lobby. I remember this theater being announced in the final ads for the Colonial Theater downtown, leading me to believe the Colonial’s then-owners were the Parkhill’s owners. Also, S&E had just pulled out of Williamston the previous year – why build a new three-screen in a similarly-sized town? The Parkhill Cinema was probably the last cinema in Eastern NC built with fewer than four screens (the only later theaters with less than four screens I can think of are the Cameo in Fayetteville, the Marbles IMAX Theater and possibly the Studio I & II – both in Raleigh, and the Chelsea in Chapel Hill. All of these are west of I-95).

As with so many other small, independent theaters, the Parkhill is struggling to survive; in addition to the digital conversion challenge, the mall in which it is located is also having some problems: View article.

The Parkhill Cinema 3 is and was always an independent exhibitor; neither Stewart-Everett nor Carmike Cinemas ever owned this theater. The Oakwood Twin Theatre in Rocky Mount was the only S&E or Carmike venue in Edgecombe County.