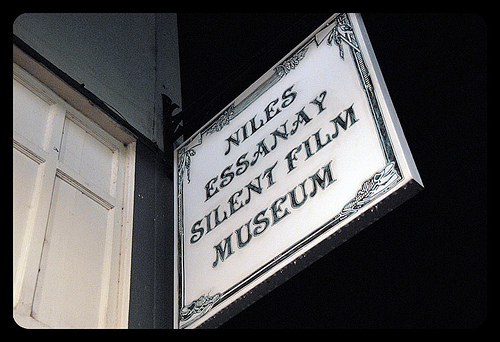 The Edison Theater was built in 1913. Within a year it had been renamed Bell Theater. It remained a nickelodeon until 1923, when it transformed into the Egyptian Ballroom Dance Hall. The Niles Theatre was built next door at that time. Unfortunately, the Niles Theatre was burnt to the ground in 1959, leaving no movie theatre operating in Niles (now a historic district in the city of Fremont, CA).

In 2004, the newly formed non-profit group Niles Essanay Silent Film Museum was able to rent and begin restoration of the Edison Theater. What had started as an annual silent film festival focusing on the film making legacy of Niles as a major film studio in the silent era, has now expanded to weekly film showings. There are free tours of the museum and theater on weekends from 12:00-4:00pm. On display are silent film cameras, projectors, costumes, photographs and much more. You can even see the projection room!

The Niles Essanay Silent Film Museum is more than a repository of photographs, posters, books and artifacts; it is a resource for all facets of silent film-making, from their planning and production to their presentation. This non-profit museum offers a way to rediscover America’s movie pioneers and to see their remarkable work in an authentic setting – a theater where Charlie Chaplin and Broncho Billy Anderson saw themselves and their contemporaries on the screen. This museum keeps the spirit of silent films alive with special events like Charlie Chaplin Days and the Broncho Billy Silent Film Festival. In 2012, we will celebrate the 100th Anniversary of the Essanay Film Manufacturing Company coming to town and starting it all.