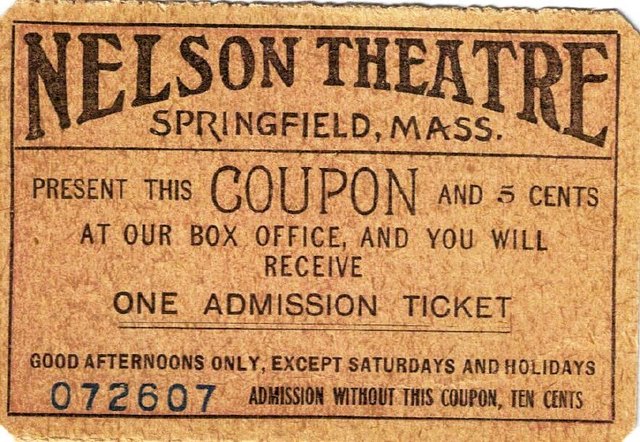 The Nelson Theatre was opened in 1897, and in later years was located just south of Springfield’s mammoth Paramount Theatre on Main Street. It was renamed Fox Theatre in 1919 when it was taken over by William Fox (sometimes known as Fox’s Springfield Theatre). It was listed with 1,300 seats in 1926. In 1934 it was renamed Art Theatre.

For many years the Art Theatre hosted second run showings of Warner Brothers films which had played their first run engagements at the other SW house in Springfield (the Capitol Theatre) which was located several blocks away at the corner of Main Street and Bridge Street.

Closed since the 1950’s, a bank building now occupies the site of the Art Theatre.

Built and opened in 1909 as Nelson’s Theater, it became the Fox in 1919. In 1934, it became the Art. It closed in 1956 and was razed in July, 1961. The Art had no balcony. It’s exterior front had a small, old marquee (left over from it’s Fox years) with small spaces for titles on it’s sides and on the front. Looming above the marquee was a verticle sign spelling out ART that was capped by a circle. This sign lit up at night and was a bookend to the Paramount’s own verticle sign just seven doors down on Main St. A ticket booth stood in the center with two doors on either side of it.

This dingy theater had a reputation of being a haven for drunkards and drug addicts during the late 1950’s. Most teens were warned not to save 50 cents by taking a date to this second run Warner house. Apparently, this theater did have its prime during the Nelson and Fox years. It appeared that once the Paramount became Springfield’s premiere movie palace the Art, being several doors south, settled for being the has been.

There is a MGM Theatre Photograph and Report form for the Art in Springfield. The 1941 photo shows the Art’s entrance in the middle of a large office building. There is a small marquee with a large vertical sign above. Attractions are “Strawberry Blonde” and “Mistic Circle Murders”. Below the marquee is a center boxoffice, with double doors on either side, flanked by poster cases. Someone penciled in “WB” on the report, probably for Warner Bros. The Report states that the Art is on Main St., that it is not showing MGM product, that it’s over 15 years old; is in Good condition, and has about 1,000 seats, all on one floor. Also typed on the form is “Last Run”.

As Fox’s Theatre, this house is listed in the 1927 Film Daily Yearbook as having 1300 seats and open daily.

The July 3, 1897, issue of American Architect and Architecture had this report: “Springfield, Mass.—E. W. Maynard, of Boston has made plans for a $100,000 opera-house to be built on Main and Hampden Sts., for Nelson & Vinton.”

A trade journal called The Bookseller, Newsdealer and Stationer made reference in its issue of March 1, 1899, to “…Fred. Kettler, who painted the Nelson Theatre curtain….” having lately been hired as director of the decorative department of a Springfield outfit called the Old Corner Wall-Paper Company.

A Nelson Theatre was certainly in operation at Springfield in 1908, when part of its program was noted in the May 18 issue of the Springfield Republican that year: “The musical features of the week will include a ‘Kid song festival,’ in which Lillian Payette will be heard in three costume songs, with electrical effects and illustrated songs by Charles L. Taylor of New York, who on Wednesday and Thursday will sing ‘Take me out to the ball game.’”

Either this house was opened earlier than Edward Shear reported it to have been, or it replaced an earlier Nelson Theatre, probably on the same site. If it was the latter, what disaster befell the original Nelson Theatre?

This article has some details about this theater when it was the Nelson’s Theatre.

There is a 1909 article here about a dispute over the lease on the theater involving both the Shubert and the Poli circuits.

The Nelson Theatre was listed in the 1898 Cahn guide as a ground floor house with 538 seats in the orchestra and 369 in the balcony. There was also a gallery seating 500, presumably later closed when it became a movie theater.

A court case settled in 1913 reveals that the William Fox Amusement Company actually got a lease on the Nelson Theatre in March, 1909. Documents in the case also cover events during the few years prior to the Fox lease, and don’t mention any disaster befalling the building during that time. I think we can conclude that the Nelson was the theater built in 1897 and designed by architect E. W. Maynard (per my comment of October 10, 2011.)

The Nelson was eventually operated for a time by Arthur Theaters as well, as shown in an item from the July 3, 1934 issue of Film Daily which says “Springfield, Mass. — The Fox-Nelson Theater has been closed by Arthur Theater Corp.”