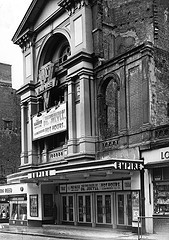 Originally built to the designs of architect James Murray and opened in March 1856 as a Corn Exchange, it was used mainly for concerts and lectures. Charles Dickens first appeared here in December 1857. It was screening films in 1901, showing Edison’s Animated Pictures of the Boer War.

In 1906, it was re-designed as the Empire Theatre to the plans of architects Harrison & Hatrell. The façade had an open balcony above the centrally placed entrance, framed by a pair of Corinthian column on each side. On top was a arched window, which supported a pediment on top. Inside the auditorium, seating was provided in orchestra, dress circle and balcony levels. Bioscope films were being screened by 1908 as part of the variety programme. It became the first building in Coventry to hold a Cinematograph Licence after the new Cinematograph Act of Parliament came into force in January 1910.

New owners took over in January 1927, and in 1929, a Standaart 2Manual/4Ranks organ was installed. This Dutch made instrument had its console fixed in the centre of the orchestra pit, and was opened by organist Percy Milton. Disaster struck during the screening of a programme “Runaway Bride” and “Midnight Follies” on 23rd April 1931, when a fire began in the roof of the building, spreading to all parts (apart from the concrete projection box at the rear of the upper balcony). A new company Empire (Coventry) Ltd. was formed, headed by Leon Salberg & Capt. S. Clift, and they were bought into by the Associated British Cinemas(ABC) chain who employed their ‘in-house’ architect W.R. Glen to assist in the redesign the cinema internally, to the plans of the architectural firm Satchwell & Roberts.

The Empire Theatre was re-opened on 3rd September 1933 with Doris Arnold in “Radio Parade” and Ralph Bellamy in “Below the Sea”. The theatre was equipped with a Compton 3Manual/11Ranks organ with illuminated console, which was opened by organist Alex Taylor. Seating in the auditorium was now provided for 1,547, with 917 in the stalls and 603 in the single circle level. The proscenium was 42 feet wide, the stage 21 feet deep, and there were three dressing rooms. The front of the building received some serious damage due to German bombing in World War II. It was equipped for CinemaScope in 1954.

It was re-named ABC Empire in 1969. The ABC was closed on 3rd July 1971 with Jonathan Frid in “House of Dark Shadows” and Stacey Keach in “The Travelling Executioner”. It was demolished and the area was redeveloped.

The new redevelopment included a new ABC cinema which opened on 23rd May 1973 with Glenda Jackson in “Bequest To the Nation”(aka The Nelson Affair). This 840 seat cinema, equipped to screen 70mm films and since closed, has its own page on Cinema Treasures.

2 photos uploaded of the auditorium courtesy of a friend who managed the replacement new ABC which occupied the same site as the ABC Empire.

A question that arises is when did the Empire change it’s name to ABC. Allen Eyles in the ABC of ABC and Brian Hornsey in his booklet on Coventry cinemas both state that it changed to ABC but neither give a date. In an effort to pin this down more precisely, I have looked through local newspapers, and I found that it appears to never have changed it’s name. It advertised as the Empire (or more exactly as the ABC Empire) right up to closure.

When Cinemas had theta names. They were always Prefixed with ABC even when they were just managed cinemas

True enough, Mike. The Haymarket, Newcastle (one of the very last to have the ‘ABC’ lozenges added to the Front of House in 1972) was always referred to simply as “the Haymarket” whilst the triangular sign outside, in true ‘ABC’ fashion, said ‘ABC Haymarket’.

Press advertising usually stated ‘ABC Haymarket’ but quite often the ‘ABC’ reference was omitted totally in the Evening Chronicle ‘semi display’ ads which all city centre cinemas used (for the sake of economy) in weekday editions.

Even when , from 1972, it was simply the ‘ABC’ the locals always said “the Haymarket”. Ironically, from 1974, when the former Essoldo came under the ABC banner, press advertising had to say ‘ABC Haymarket’ to distinguish this from the ‘ABC Westgate Road’ and so there was never going to be any chance of it being referred to as simply the ‘ABC’.

In Coventry’s case, of course, there were obviously long term plans to replace the Empire (as there were for Newcastle Haymarket for decades but these never materialied) and so it never became the ‘ABC’ and the title ‘ABC Empire’ would have applied from the 1930’s until its closure in 1971 and not from 1969.

A little long – winded, I know but I am guessing that at least some younger people may reference this site so it is just as well to have things correct.

Terry The Empire was one of the many oddities on ABC It was still owned by the Clifton syndicate in disguise :0) Most of Birmingham ABCs and Wolverhampton was by the same arrangement ASSOCIATED BRITSH CINEMAS meant what it said on the label. They had the Mayfair Circuit which was an arrangement with Essoldo

Yes, Mike in Golden Square were listed the names of all the associated companies…