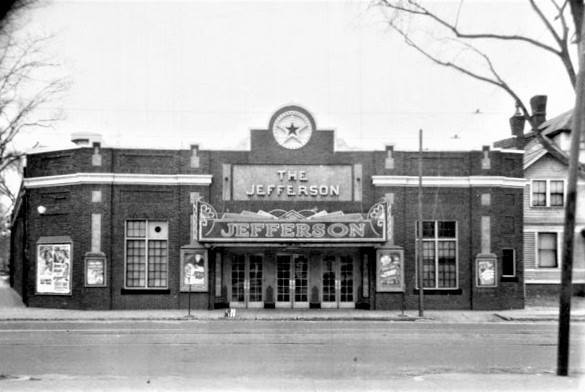 The Jefferson Theatre, located in Springfield’s North End, was opened October 6, 1921. It one of several neighborhood second-run theatres operated by Herman Rifkin Theaters. It was closed in 1962, but briefly reopened as the Jefferson Fine Arts Theatre.

The Jefferson Theatre was located at 2645 Main Street and it seated 1030 people.

The Jefferson opened on Oct. 6, 1921 and closed in 1962.
In the early ‘70’s, it reopened briefly as the Jefferson Fine Arts before closing forever. The theater was gutted and it became an electrical supply buisness. Later, the building stood empty and boarded up with only it’s name carved in stone above where the marquee once hung.

Someone Who Was There tells me that he was in Springfield last week and found the Jefferson still standing.

The Jefferson is listed in the 1927 Film Daily Yearbook as having 1036 seats and open daily.

From the current google street view, it looks like they’ve brouight the building back into use – probably as storage – at least it isn’t all bricked up anymore

us kids used to go there every sat.in the 50s.they would always have clifthanger serials.my mom would go on friday nights and they used to give kitchen place settings bowls,plates.great family movies

The May 26, 1923 issue of The Moving Picture World said that the Jefferson Theatre in Springfield had been designed by local architect H. L. Sprague.