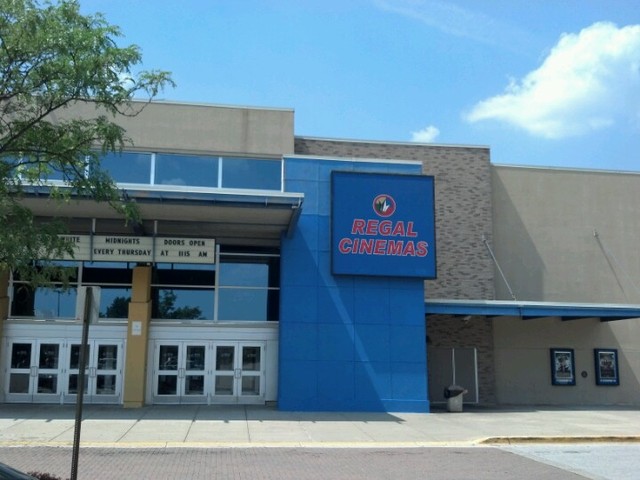 This 14 screen theatre was opened originally by the Hoyt’s chain around the same time that Potomac Yard 16 was opened in 1998. There are 10 theatres on one side of the building and 4 located on the other with a large lobby area in between.

Regal acquired this location along with several of the other Hoyt’s locations in 2004. Since Regal came in there have been a few changes. They added a guest service area in the lobby, the box office was glassed in, and the concession stand saw a renovation. There were several different sound systems used when Hoyt’s opened. The seats are stationary and there are no removable armrests which have since been pretty standard in new builds.

This venue opened up in ‘97 or so. Just prior to this venue opening there was a twin venue opening just outside of Baltimore. I think the first movie I saw here was the sequel Babe: Pig in the City. When it first opened, the two largest theaters were two stories high and played movies loud. I think the original plan was to open a cafe that bridged the two big theaters but nothing ever came of it. There were restrooms upstairs as long as elevator access. These big theaters received the Dolby EX upgrade back in '99 when Star Wars: The Phantom Menace opened.

When Regal took over, this place went downhill. Projection was lousy with scratched film presentations. When Hoyts ran it, they had decent concessions such as freshly made coffee drinks. Regal tried to run it but many times employees just put up out of order signs. The many times I wrote to complain about the lousy service here met with the usual apologies and free passes.

Recently, there have been digital 3D upgrades, but I’ve stopped going here. Many times there are riff raff that come and unfriendly policemen who double as ushers. I remember my friend and I being ‘escorted’ to the auditorium and told where to stand and wait at a specific spot before entering. Not a good experience. Maybe the place has improved since I last visited in ‘09, but I have no interest in going back for now.

I have really unfond memories of this theater. I saw ‘'Diary of a Wimpy Kid: The Long Haul’‘(the less I say about the movie, THE BETTER)here, and it was a miserable experience. The seats were sticky, had no removable armrests(which is very odd, even back then, because back in the late 1990s, when this theater opened, a lot of movie theaters(especially AMC) were putting removable armrests on their theater seats, and they are now a main feature in regular seats and theater recliners) and uncomfortable and the theater smelled JUST AWFUL. Yeah, sure, the projection quality is excellent(this is one of the few Regal theaters that still use the Sony 4K projection system, which can explain the high image quality it has), and it is one of the few theaters that still has Dolby Digital EX)(The auditorium I was in didn’t have it, it only had regular Dolby Digital sound.)(And I think that this theater had DTS and SDDS(Sony Dynamic Digital Sound)too. I’m not sure, but I think it did. So, this theater DEFINITELY had Dolby Digital and Dolby Digital EX, and probably had DTS and SDDS sound too. Who knows.) . But in a world where now recliners are the main seat of choice in a movie theater, IMAX and large format theaters are entering more theaters, and Dolby Atmos(and Dolby Surround 7.1 is starting to become a popular sound choice, too)(and to a lesser extent, Auro 11.1, and DTS X is starting to pop up in some theaters, too.) is now the main sound system of choice, this theater, with it’s now outdated seats, projection system, and sound systems, this theater is really lost in the shuffle. You can tell that this theater was opened in the late 1990s(around late 1997 or early 1998), and after almost 20 years of the theater opening, it still has that 90’s feel in it. It really needs to be renovated, and it shows. Recliners and the addition of Dolby Atmos sound(which will probably be in an RPX theater, but I doubt it, since Regal hasn’t really done anything with Atmos since 2013)(I’m sure that if they renovated it, the sound system will probably be Dolby Surround 7.1) will help save this theater, but there might be a chance that the theater will be closed down, too. We’ll see.

And this theater hasn’t changed. Looks like it has the same abysmal seats, poor smell, but still the same excellent 4K screen quality. I didn’t talk about the sound(however, the only film I saw at this theater, “Diary of a Wimpy Kid: The Long Haul”, which was a really awful gross out family comedy(if you can call it that)(and the second worst film of 2017, behind you know what it is(“The Emoji Movie”(and ironically, I saw a trailer for that film before “Wimpy Kid”, and I have a feeling that it was attached to “Wimpy Kid” as well), wasn’t very reliant on BIG, LOUD sound.)(and believe it or not, I found out that the Blu-Ray for “Wimpy Kid” has 7.1 sound. That’s VERY generous for a film like that.), and that’s for a reason. It’s just a standard, 5.1 PCM mix with nothing special whatsoever. I think that the bigger auditoriums do have 7.1 sound(I saw “Wimpy Kid” in one of the smaller auditoriums), but I will never know. Still, this theater could be close to shutting down if it doesn’t have any renovations.