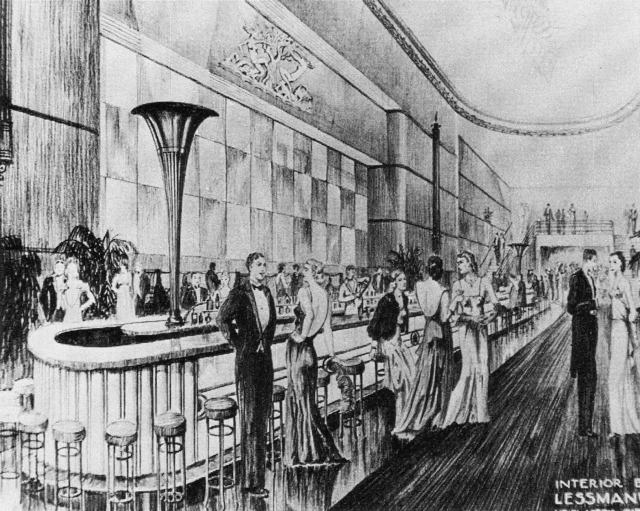 One of two theatres occupying the large Loew’s Building (the other being the State Theatre), the Ohio Theatre opened on February 14, 1921 with 2,153 seats. It was designed by Thomas W. Lamb and, as the name of the building implies, operated, like the State Theatre, by the Loew’s circuit.

The Ohio Theatre, unlike its larger sister, the State Theatre, was originally designed as a legitimate house, though by the Depression, was used more and more infrequently. In 1935, the Ohio Theatre was converted into the Mayfair Casino, which featured a nightclub with jazz acts onstage. However, the Mayfair Casino didn’t catch on, and closed within a year. Afterwards, the Ohio Theatre was reopened as a movie house, which it remained until 1969 when both it and the State Theatre were closed within a week of each other due to declining attendance.

Not long after closing in 1969, vandals set off the sprinklers inside the Ohio Theatre, ruining most of the ornate plasterwork décor throughout the theatre’s interior. In the early-1970’s, in both the Ohio Theatre and the State Theatre, the auditorium seats were removed and auctioned off, and the ceilings of both theatres were eventually opened in many places to the elements, allowing rain and snow inside. In its later years, the Ohio Theatre had more than its share of challenges. An extensive fire largely gutted the long, ornate inner lobby (which was rebuilt in a drab modern style), and the entire auditorium was painted fire engine red.

It was in a sorry state by the time the Playhouse Square Association (formed in 1970) began its ambitious plan to restore all four movie palaces in the Playhouse Square area (the State Theatre, Allen Theatre, Palace Theatre and Hanna Theatre) and slowly funds were raised for the restoration of the Ohio Theatre.

In 1977, Cuyahoga County purchased the Loew’s Building, and both of its theatres were added to the National Register of Historic Places the following year. The Ohio Theatre was the first to be restored, reopening in 1982. The auditorium was beautifully restored although with a different (cream and olive green) color scheme, and the modern lobby was freshened up, while the outer lobby was converted into a restaurant. Guests now entered the inner foyer from the State Theatre’s grand lobby.

In 1990, the rear part of the Ohio Theatre grand lobby was remodeled into a beautiful semi-Atmospheric style courtesy of a generous donation from the Reinberger Foundation. This was followed by a repainting of the auditorium in 1992 in its original colors and finally in 2016, the grand lobby was restored to its original appearance.

Yes, CLEOPATRA played road show at the Ohio. Others besides, SOUTH PACIFIC, AROUND THE WORLD IN 80 DAYS, the TEN COMMANDMENTS were BEN-HUR, WEST SIDE STORY, EXODUS, STAR!, DOCTOR DOLITTLE, MUTINY ON THE BOUNTY, KING OF KINGS. I think BEN HUR had the longest run.

This reopened as a movie theatre on September 23rd, 1943.
ad: View link

September 23rd, 1943 grand opening ad as a movie theatre has been uploaded in the photo section

It was 50 years ago today that “The Sound of Music” premiered at the Ohio Theatre. With a reserved-seat run of 91 weeks, it’s almost certainly the long-run record holder for this venue. (Anyone know of something that ran longer?)

“The Sound of Music” also was, I believe, the second of two consecutive long-running Julie Andrews movies to play this venue between 1964-66. That 24-month period would’ve been bliss or hell depending on whether or not local moviegoers were a fan of Julie!

In the past couple days on WCPN-FM 90.3 someone was interviewing a woman previously associated with The Front Row theater and presently involved in some capacity with Playhouse Square. I wasn’t really paying attention so I didn’t take note of the names. My ears perked up, however, when the woman from Playhouse Square stated that the State Theater will be closed for a while for re-painting. She then stated that the lobby of the Ohio Theater is going to be demolished and re-built as it was before fire gutted it in the 1960s, which for the most part was the way it was at the 1922 grand opening. The photo on the overview page here is the way it was in 1922. After the fire in the ‘60s Loews re-built it as a typical modern suburban mall theater lobby with red walls, red carpet and flat acoustic tile ceiling with recessed can-lights. The theater by then was on its downhill trajectory (and would finally shut down in 1969) so not a lot of dollars or brain cells were expended on post-fire repairs. Playhouse Square’s remodeling was nice, but in no way resembled the original.

Thanks to HowardBHaas for letting us know about that article. I note that Evergreen Painting Studios of New York is involved with the Ohio lobby project. Evergreen was involved with the restoration portion of the 1990 plexing of what became the Village East Cinemas, and did a lot of work on the 1996 main lobby renovation of the Loews 84th Street, both in Manhattan.