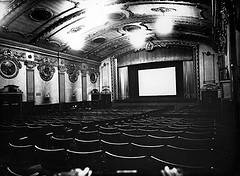 Located in the Openshaw district of Manchester on the left side of Ashton New Road (when travelling into Manchester city centre), between Rhodes Street and Parker Street. Originally on the site was the Royal Picturedrome, which opened in 1914. It was taken over by the Associated British Cinemas(ABC) chain on 1st July 1929. ABC demolished the Royal Picturedrome in 1930, and the New Royal Picture Theatre was built on the site. Seating was provided in stalls and circle levels.

The ABC was closed on 25th January 1969 with Yul Brynner in “Villa Rides”. Closure was due to a Compulsory Purchase Order. The entire area has now been totally redeveloped.