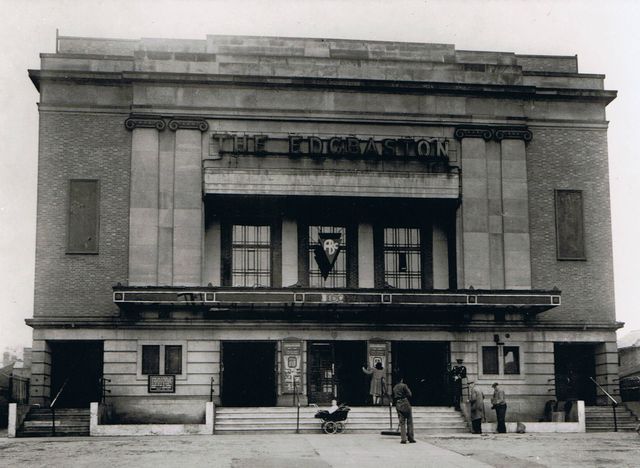 Located in the Edgbaston district southwest of Birmingham city centre. The Edgbaston Cinema was opened on 28th December 1928 with Douglas Fairbanks in “The Gaucho” and Richard Dix in “Gay Defenders”. It was built for and operated by Cinema Proprietors Ltd. Supervising architect was Ernest S. Roberts of the architectural firm Satchwell & Roberts.

It was a monumental looking building in grey stone, set back from the road with a paved forecourt in front. Inside the auditorium seating was provided in stalls and circle levels. The decoration was relatively plain, but there were large painted panels on the side-walls depicting pastoral scenes. The cinema was equipped with a Compton 2Manual/8Ranks theatre organ which was opened by organist Roy Page.

The Edgbaston Cinema was taken over by Associated British Cinemas(ABC) soon after opening. The Compton organ was damaged and removed from the cinema in 1941, when the building suffered some damage by German bombs.

ABC closed the Edgbaston Cinema on 16th November 1968 with Richard Harris in “Camelot”. The building was converted into a bingo club, which only lasted a few years. It was then operated by Mecca Ltd. as Old Time Music Hall. The building was subsequently demolished and housing now stands on the site.

After bingo closed, it was taken over by Mecca Ltd as the Old Time Music Hall - see Mike Blakemore’s photo on here.