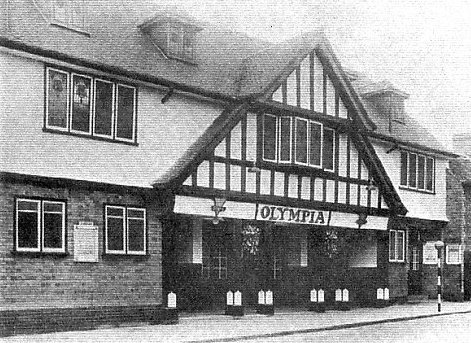 Located on Blockall, a little out of Darlaston town centre. Built as a skating rink in 1911, it was soon screening films, and was re-designed as a cinema by the architectural firm Joynson Brothers. It opened as the Olympia Picture Palace on 19th October 1912. Seating was provided on a single sloping floor.

In the ground beneath the building was a coal seam, which tended to break out in spontaneous combustion, causing subterranean fires. In 1914, the entire flooring of the auditorium was concreted over, to put the audience out of danger.

In the 1920’s, the Olympia Picture Palace was operated by Pat Collins. In 1926, it was taken over by Joseph Cohen & Mortimer Dent & Joseph of Cinema Proprietors Ltd. (C.D. Cinemas Ltd.)

In January 1929 it was taken over by Associated British Cinemas(ABC). The Olympia Picture Palace was closed suddenly on 10th December 1955 with Gene Kelly in “Thousands Cheer”. The building became a car showroom. It was demolished around 1965, and housing was built on the site.