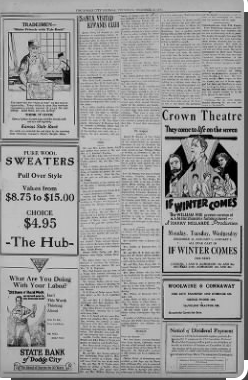 The Crown Theatre was opened around 1923 and continued until at least 1950. It was last operated as the Cooper Theatre.

The Crown Theatre in Dodge City is on David & Noelle Soren’s list of known Boller Brothers theater designs as a 1923 project, with the aka Cooper Theatre.

In 1939, the Crown was one of three Dodge City houses (along with the Dodge and the Cozy) that co-hosted the world premier of the Warner Bros. film Dodge City. Star Errol Flynn and numerous other movie stars attended the event.

According to an article in the January 28, 1954, issue of the Hutchinson, Kansas News Herald, Fox Kansas Theatres operated the Crown under a lease from 1935 to 1949, at which time they sub-leased the house to Fox Plains Theatres which in turn sub-leased it to Glenn Cooper. It must have been at that time that it was renamed the Cooper Theatre. The Cooper Theatre was in operation at least as late as 1958.

Uploaded an image from the December 27, 1923 Dodge City Journal showing an ad for the Crown and one from May 15, 1924 which also carried an ad for the Beeson.