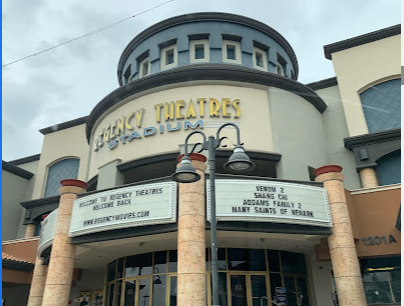 There was controversy from the start when it was announced in August of 1995 that a CinemaStar theater would be built at University Village. The main concern was that the theater, next to the university, would be financed by a redevelopment agency using public funds. The Riverside Press-Enterprise said many were concerned that there were already 15 screens within two miles of the proposed cinema. The theaters to be affected were the Market Place and Canyon Crest Theatres operated by SoCal Cinemas, who were not too happy. They felt that the market was saturated so the Canyon Crest went discount before the University Village opened.

The Cinemastar 10 at University Village opened on November 22, 1996, with three screens reserved for art films. Three of the auditoriums doubled as classrooms because of the University of California Riverside’s $1 million contribution. On January 28, 1997, as predicted, SoCal Cinema’s 9 at Canyon Crest closed five of its screens with four remaining open for art films.

The Press-Enterprise on December 7, 2000 reported that CinemaStar suddenly closed the University Village 10. The reason given was inadequate parking. CinemaStar immediately removed $2 million in equipment, which was disputed by the landlord, who later sued the theater operator. On June 1, 2001 Metropolitan Theatres, spending $1 Million for renovations, took over operation of the University Village 10. In March of 2009, UltraStar Cinemas assumed management and converted all 10 screens to digital projection but their tenure lasted about 33 months.

On December 16, 2011 Southern California’s aggressive and growing Regency Theatres finally received their opportunity to make this location work, as their 28th location. It was closed in December 2021.

I seen the movie 8 Mile here when it premiered.

Big screen is correct. Regency University Village 10 Cinemas is permanently closed unfortunately. Good news! This location is now a Look Dine In Cinemas with 12 screens matching the Redlands location. Please update to closed. No opening date on the new theater per Look website.