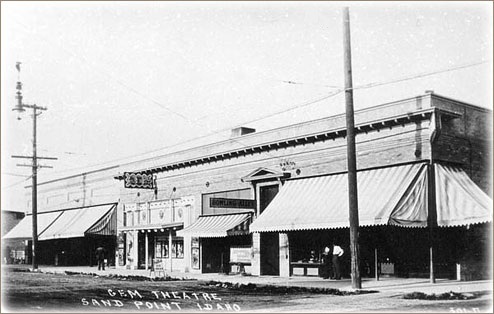 The opening of the Lake Theatre was announced in the Spokane Daily Chronicle on August 8, 1946. It was built by remodeling the old Gem Theatre, which had been closed after the opening of the Panida Theatre, about 19 years before.

The history of the Gem Theatre can be traced back to at least 1917 in newspaper archives and was once owned by Jack Gardner who sold it to F.C Weskil, after Weskil opened his Panida Theatre. The owner of the new Lake Theatre, as well as the then owner of the Panida Theatre, was Floyd Gray. Gray was elected mayor of Sandpoint in 1949.

The Lake Theatre was nearly a year and a half old when it was severely damaged by a fire on January 4, 1948. The Daily Chronicle reported that the floor joists gave away and the seats fell into the basement, where a bowling alley was being built. The start of the fire was said to come from the basement room where the former owner was living when a candle fell over igniting some newspapers. Luckily there were no reports of injury as it happened on a Sunday afternoon before show time. On June 26, 1948 Gray reopened the rebuilt theater using projectors and seating from the Panida Theatre. Film Daily Yearbook of 1951 lists seating as 300.

The Lake Theatre was located a block south of the Panida Theatre on the same side of the street. Hey, Cupcake!, which was open seasonally, was the most recent occupant of the site in 2011.