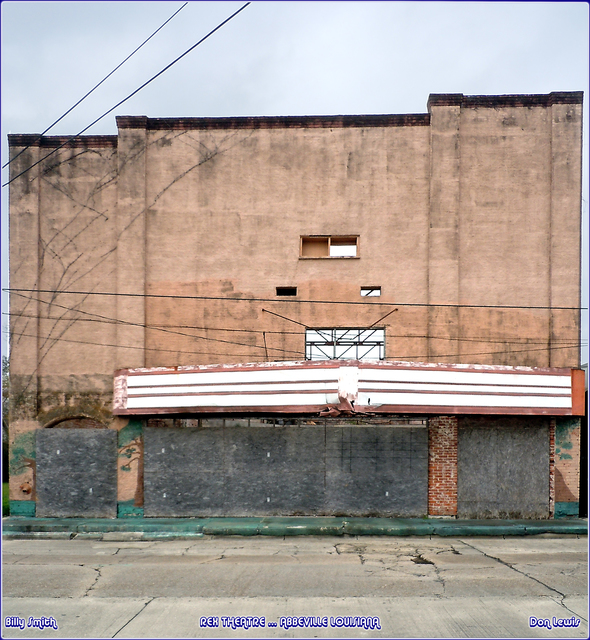 The Rex Theatre was opened on February 2, 1940 with George Raft in “Invisible Stripes”. In 1950 it was renamed Bob Theatre, it was closed in 1961. The building still stands in 2021 as a a roofless empty shell.

2 Photos of the Rex Theatre taken back in 2010. Click on photo to enlarge. Enjoy..

In 1950, the Rex Theatre was renamed the Bob Theatre. This is the story from the “New Orleans” column of the April 1, 1950, issue of Boxoffice:

“F. R. DeGrauw [sic], president of F&R Realty, Abbeville, has leased the Rex Theatre, Abbeville, La., and will operate it under the new name Bob. New sound equipment is being installed and the theatre is undergoing remodeling. Opening date for the 800-seat house has been set tentatively for April 8.”

I’ve found a couple of references to the Bob Theatre on the Internet, but no details about it. A Wikimapia entry has the coordinates rather than the address, but put into Google Maps the coordinates do come out to the address 108 S. Washington Street.

One Internet reference calls the house Bob’s Theatre rather than the Bob Theatre. It’s quite possible that it’s correct. The deGraauw family owned Frank’s Theatre, which appears to have been renamed (from the Dixie) for F. R. deGraauw’s elder son, Frank, so it seems logical that the Rex would have been renamed for the younger son, Bob. Robert deGraauw died quite recently, and his obituary at VermilionToday.com mentions the family’s involvement in the theater business at Abbeville from at least 1927. They also owned the Lafitte Drive-In.

The 800 seat capacity noted in the Boxoffice item seems plausible. This is a good-sized building, as can be seen from Randy Carlisle’s photos, linked in the previous comment.

In this article from VermilionToday.com, dated May 27, 2011, Charles Sonnier, who was planning an adaptive reuse of the Bob Theatre, says that the house “…was built in 1939 by a Mr. Robinson.” He adds “I think the theatre was shut down around 1961.”

As Sonnier grew up in Abbeville and attended the theater, I think we can accept his usage of Bob Theatre as the actual name of the house in its later years.

2018 Google Street View shows it as being an empty shell.

Opened On February 2, 1940 With George Raft In “Invisible Stripes” Along With A Musical Novelty Featuring Larry Clinton’s Orchestra, A Merrie Melodies Cartoon “Hamateur Night”, And A Newsreel.