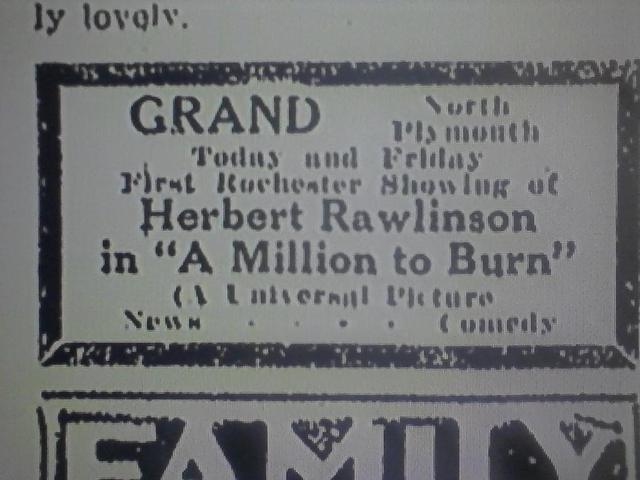 The Grand Theatre was opened prior to 1912 and is listed in the American Motion Picture Directory 1914-1915 as being at 8 Plymouth Avenue N. By 1925, it was operated by the Schine Circuit, with 800 seats.

In the 1950 edition of Film Daily Yearbook, the address is given as 30 Plymouth Avenue N. and with a seating capacity for 1,150.

This item in the July 13, 1912, issue of The Moving Picture World mentions the Grand Theatre:

“SOME BIG PIECE OF GLASS.

“The Mirror Picture Screen Company has installed one of its screens in the Grand Theatre, Rochester, N. Y. This particular screen is 14 feet high, but our informant does not state the width. Presumably it is 18 or 20 feet in width. Another order is being filled for a theater at Rockaway Beach, N. Y., which will belong to the record breaking class.”An editor of the magazine later visited the Grand Theatre and wrote about it in the August 31 issue:

“The reason for this excursion was a desire to examine the mirror screen in the Grand Theater of Rochester, which screen has a new finish. The mirror screen people claim this finish does away with the out-of-focus effect when sitting to one side of the screen.”

“…I went up and called on the management of the Grand Theater, Messrs. Thompson and Tyler, who have recently installed a mirror screen, said to be made from the largest piece of plate glass in the world. This was the screen I had come to look at and it was worth the trip. The house is quite wide and quite long, incidentally very tastefully and beautifully designed and decorated. I tested this screen from all parts of the house and find that the results are excellent. From the rear of the house the picture was certainly a marvel of beauty, clear, brilliant and as sharp as a knife. Down close to the screen the picture was still good, though of course a little of its sharpness was lost, as would be the case with any screen. Off to one side, at a very sharp angle, the picture was still fairly clear, and here was where a queer effect occurred. Those who have wide houses and an ordinary screen, know that when the picture is viewed at a sharp angle, the figures of actors appear to be abnormally tall and very thin. This seemed to be entirely absent with this screen, but there was a slight out-of-focus effect, though not enough , to present serious objection. I figured that the loss of the elongation fully balances any out-of-focus effect present, and I feel that I can say that the mirror screen with the rough finish, such as Messrs. Tyler and Thompson have, can be successfully used in any house, regardless of its width.

“Messrs. Thompson and Tyler are experienced show- men, particularly Mr. Thompson, and the result of their experiences shows in the excellence of their projection, as well as in the beauty of their house; also in the fact that they do a land-office business, with automobiles lined up in front of the house every night.”An article in the March 21, 1925, issue of the Oswego Daily Times listed the Grand Theatre in Rochester as one of 38 theaters owned or controlled by the Schine circuit, in which Universal Pictures had just bought an interest.