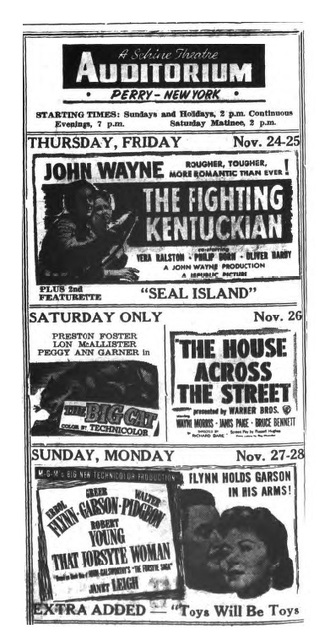 The Auditorium was listed in the 1914-1915 edition of American Motion Picture Directory. By 1941, it was operated by the Schine Circuit. It was still open in 1950, and the building still exists today.

The Perry Auditorium is located in Perry Town Hall, 22 S. Main Street. It is a two story red brick building of vaguely Georgian Colonial Revival style. The auditorium is on the ground floor, and an assembly room used for dances and other community events is upstairs. The post office was also originally in the building.

A vintage postcard of the Town Hall will briefly display on this page of the Town’s web site (just refresh the page if the picture goes away.)

A book called History of the Town of Perry, published in 1915, says that the Town Hall was built in 1898, and even though the building was not yet completed, a local amateur stage production of a comedy called The Henrietta was presented there on the nights of December 30 and 31 that year.

The Auditorium at Perry advertised in the December 5, 1908, issue of The Billboard that it was seeking attractions, and boasted that Perry was “…the best show town in Western New York.” The promoter doing the soliciting was George H. Holmes, who gave as an address a PO box in Hornell, NY.

A 1966 issue of Motion Picture Herald published this notice: “Philip Scoville of Geneseo, who operates theatres in Olean, LeRoy, and Lima, NY, and Frank R. Versage, of Mt. Morris, have re-opened the Auditorium Theatre in Perry, NY.” I’ve been unable to discover how long this operation was able to continue.

A correction on the address I gave in my previous comment: 22 S. Main Street is actually the location of a bank. The Town Hall was apparently at 32 S. Main.

I’ve come across a document which says that the old Perry Town Hall was destroyed by a fire in 1983, and its site is now occupied by a parking lot. The building had been listed on the NRHP.

Further correction: The correct address of the Auditorium might have been 36 S. Main. I can’t find the actual address anywhere on the Internet, but a 1964 photo in this PDF (a very large file) shows the block and singles out the building next door as having the address 34 S. Main. I think the Town Hall/Auditorium’s address must have been higher rather than lower, but I’m not positive.

OK, the PDF I linked to has a map showing the address of the parcel on which the Town Hall was located as 36-38 S.Main Street. The post office was probably at 38 and the Auditorium at 36.