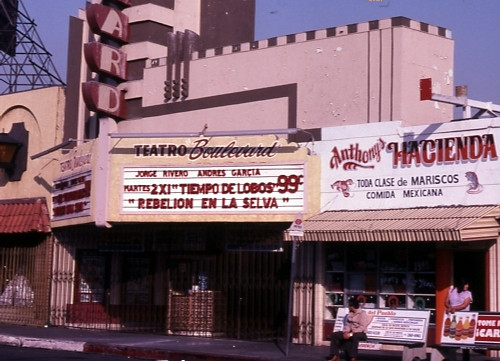 Opened as the Red Mill Theatre in around 1923. This Moderne style neighborhood theatre is more angular than streamlined in a style it gained when remodeled in around 1937. The nine letters of “Boulevard” projected separately off the horizontally lighted tower. On December 23, 1979 Metropolitan Theatres chain began screening Spanish language movies and it was renamed Teatro Boulevard.

I danced on the Huggy Boy Dance Show in 1974 during Teeny Bopper Days when I was 5 yrs old. I’m now 41 and I’ve been looking for any kind of archive footage of the show to share with my daughter. I’ve tried YouTube and other similar sites but have found nothing. Is there anybody out there that can help me find any footage of the show. I’d like to show off!!!

Does anyone remember who sang a song on the Huggy Boy Show with the chorus “I’m not black, I’m not white, I’m in the middle, I’m just right. Que viva, viva La Raza!” My wife thinks it was the theme song to the Huggy Boy Show. I remember hearing it a lot on that show.

I also would like to see old reruns of the Huggy Boy Show. Anyone out there with old tapes?

The 1926 Los Angeles City Directory lists the Red Mill Theatre at 4549 Whittier Boulevard. A comment by kenmc made on November 5, 2007, says that there is a 1930 listing in the Los Angeles Times for the Red Mill Theatre at the same address. The Los Angeles County Assessor’s office says that the building at this location was built in 1922, with an effectively-built date of 1928. The Boulevard is apparently older than we thought.

raf3412 the name of that song is called “Viva La Raza” and sung by the group called Zapata, I know this because i have the 45rpm record

The 1924 release In Every Woman’s Life is advertised on the marquee of the Red Mill Theatre in this Frank Meline photo from the USC Digital Archive. The name Red Mill does not appear on the marquee or anywhere else on the building that I can see, but there is a big windmill on the roof of the auditorium. The theater was built in 1922, so was fairly new when this photo was taken.

i’m from chicago but we lived in l.a. almost every winter since the 70’s up until the early 90’s i seen saturday night fever there in 1978. we lived around the corner on McBride street. there was also a scary movie playing the second feature. if somebody remembers what movie that was please tell me. this was around march of 1978 when the theater was showing saturday night fever. great memories. thanks. i love l.a.

There was a film horror film during this period called"Eaten alive" directed by Tobe Hooper and also when a stranger calls. by the director of The Texas Chainsaw Massacre. Google this title hope it helps out to remember. I remember seeing there. 1978 at this theater.

The Red Mill Theatre contained an organ built by the Robert-Morton Organ Company and installed in 1923. This date probably coincides with the opening date of the theatre.