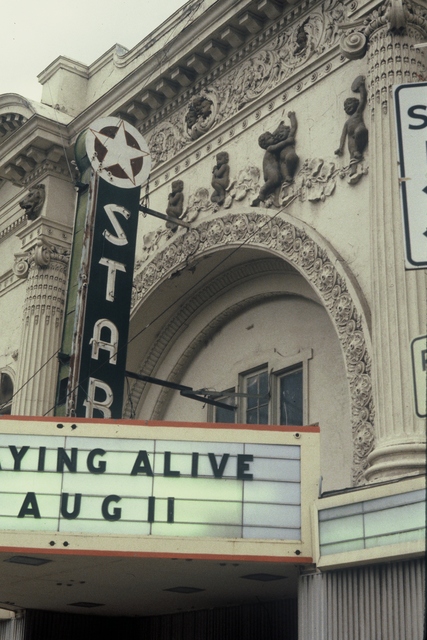 The Casino Theatre opened January 13, 1913, and had a highly ornate Beaux-Arts facade complete with twin sets of Ionic columns and terra-cotta floral decoration. Renamed the Star Theatre during the 1930’s, the theatre was modernized around the same time, including a new triangular marquee. The theatre has remained in operation since it opened except for a short time in the 1970’s.

Today the theatre, recently renamed the Casino Star Theatre in recognition of both of the theatre’s past names, is used for both movie screenings and ocassional live performances.

The theatre was added to the National Register of Historic Places in 1989.

The theater has been rescued by Lori Nay and Diana Spencer. They had been trying for 20 years to rescue the theater which opened in 1912. A potential one million dollar restoration is planned for the Beaux Arts theater. A unique feature of the theater is a well in the basement which was used for cooling and heating the theater.

Here is an expanded view of the LOC photo at the top of the page:
http://tinyurl.com/2t598w