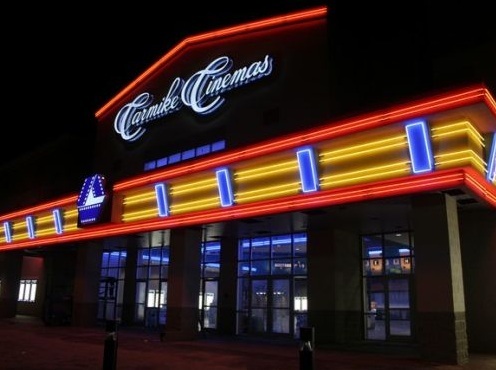 The Carmike 10 opened at the Wilson Mall (formerly Parkwood Mall) on Ward Boulevard in Wilson on June 9, 2006. It replaced the old Parkwood Mall Triple, which had closed a couple of years earlier and was demolished while the Carmike 10 was being built.

The Carmike 10 sits at the main entrance of the mall, positioned as an anchor of the renamed and remodeled mall. The theater has stadium seating in all 10 auditoriums and is one of two Carmike Cinemas built in North Carolina following the chain’s emergence from bankruptcy (the Carmike 16 in Jacksonville is the other). The Carmike 10 was the first theatre in the state of North Carolina to be equipped with digital projection in all auditoriums. It is currently the only commercial movie theater in Wilson; its former competitor, the Regal (formerly Litchfield) Cinema 6, had closed within a year of the Carmike 10’s opening. It was taken over by AMC in January 2017.

Carmike 10 opened its doors the second week of May in 2006, it was the first all digital theater in the state and was the first and only theater to utilize modern 3D technology in the state of North Carolina at this time. It also served as the only cinema in the state to play the children’s adventure film “Monster House” in 3D.

While state of the art in every way, the projection booth featured three .35mm projectors (houses 5, 6, & 10) in tandem with ten Christie DLP projectors as an effort to ease the transition from celluloid to digital.

Currently, rumors are circling the community pertaining to Carmike’s departure from it’s current location due to unfulfilled promises by Wilson Mall’s management and ownership. The likely location for a new theater is the Heritage Crossing shopping center on Raleigh Road — the original choice of location for Carmike 10 in 2004.

This bit about Carmike leaving Wilson Mall (for the second time!) leads me to believe that they were prevented from building at Heritage Crossing by the threat of a lawsuit by Wilson Mall’s owners. Carmike closed the old Parkwood Triple while under bankruptcy protection, which enabled them to break their lease.

There was a threat of legal action but it didn’t hold up. According to former members of management, the mall’s then new owners (Hull Story Gibson) offered a very sweet deal — the full extent of which isn’t known to me. However, I know for certain that a portion of this agreement included reduced rent for a number of years. It hasn’t been confirmed, but there is a bit of scuttle surrounding a stipulation on HSG’s part to help with utility costs for an undetermined amount of time. The owners of Heritage Crossing weren’t as accommodating, thus leading to the deal with HSG.

The mall has since switched ownership and the promises of Hull Story Gibson, which fell flat early on, were done away with.

I can’t blame Carmike for wanting out of this mall. Sears has left, Penneys may be next, that leaves Rose’s as the only other anchor – and a weak one at that. Rose’s did the same flip-flop at this mall that Carmike did, only they left the mall first – also in bankruptcy – and came back after Carmike did. Carmike 10 has no direct mall access; patrons must exit the mall to access the theater. If Penneys goes under, Carmike will most likely leave for Heritage Crossing or maybe Westwood (the WalMart shopping center); another possibility could be the old Kmart/Home Depot site near WalMart. I doubt Carmike would stay in a dead mall (like Tarboro’s independent Parkhill Cinema 3); they would break the lease and pay the penalty.

According to WRAL-TV 5 News the Wilson Mall is closing Monday, January 7, 2013; the mall will be demolished and redeveloped as a strip mall (as Parkwood was originally built in the 1960s). Carmike 10 Cinemas, JCPenney, Dollar Tree and Rose’s (as well as the outparcels) will be the only remnants of the current mall; Penneys will be the only remnant of the original (pre-mall) Parkwood Shopping Center. Hull Storey Gibson is betting that Carmike, Dollar Tree and Penneys will stay put as anchors for the new development; Rose’s in its current incarnation as a large-format dollar store prefers low-rent, moribund shopping centers and may move out. Carmike could still bolt for Heritage Crossing and effectively abort the redevelopment of Parkwood (Wilson) Mall.

The only original anchors that are still there is J.C. Penney and Roses which has been there since the Parkwood Shopping Center opened as a open-air strip plaza in 1964. The Carmike 10 Cinemas, along with Dollar Tree,Kerr Drugs and other speciality shops will the only remnants of the old Parkwood Mall.

Actually the Roses currently at Wilson Mall is not the original Roses store from the old Parkwood Shopping Center. The original Roses closed around 1995, became a Hills discount store from about 1996 to 1998, then was a Sears department store from about 2000 until 2011; since 2011 that store has been vacant. The current Roses was opened around 2010, long after the Carmike 10 was built; it was built as a Belk-Tyler department store in 1978 as part of the enclosing of Parkwood Mall.