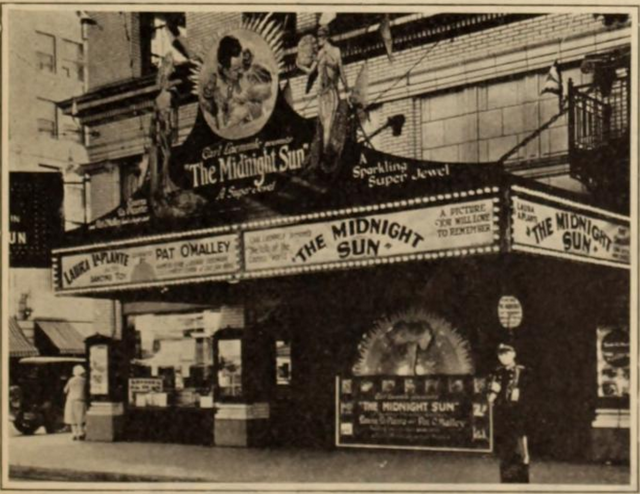 Archives of the Spokane Daily Chronicle trace the Riverside Theatre back to at least March of 1891 when it was called the Casino, an opera house. In that year a man shot and killed two actresses in the theatre before committing suicide himself. His intended victim escaped unharmed and the deceased were just bystanders.

In 1900 the Chronicle noted that a drug store was opening on the site but by 1907 J.H. Clemmer had taken a seven-year lease on the building. He spent $10,000 to convert it to the Clemmer Casino, which was called “one of the finest moving picture shows in the Northwest".

By April 22, 1927 the Chronicle reported that you could catch a glimpse of “Spain Itself” inside the former Casino. It would open the next day as the remodeled and redecorated Granada Theatre. It had a Spanish motif whose theme would be carried over to the costumes of the usherettes.

When it went through another $6,000 remodeling in August of 1937. It brought “silhouette changeable letters” to Spokane. They were described as black letters standing out against a background of Belgium flash glass. The Granada sign was also neonized for the first time.

While being operated by Favorite Theatres the Riverside Theatre closed in June of 1957, which was probably a trend of things to come because Spokane’s venerable Orpheum Theatre was the to close next January. From October of 1957 to April of 1967 it was a community theatre known as the Riverside Playhouse but was finally demolished in 1967 to make room for a bank. Today the Spokane Regional Chamber of Commerce occupies the site.

An article about Spokane’s movie theaters in the July 15, 1916, issue of The Moving Picture World had this to say about the Casino Theatre:

“The Casino theater was opened in 1907 by the late John H. Clemmer, a pioneer in the moving picture industry in the northwest. Upon his death in 1911, Dr. Howard S. Clemmer, his son, took it over and managed it until last year when he opened the new Clemmer theater. Will T. Reed is now managing the place, which is owned by the Clemmer estate.”