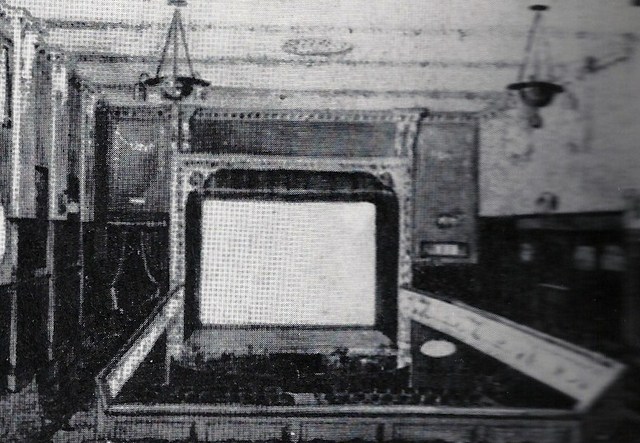 Located in Nottingham city centre on the west side of Market Street. The building first opened in 1875 as a skating rink and music hall. In 1876, it was named the Talbot Palace Theatre, and in 1889 became the Gaiety Palace Theatre. By 1901, it was known as the King’s Theatre, and Bioscope films were being screened as part of the variety programme. Later in 1901 it became part of the Frank MacNaghten Vaudeville Circuit, still screening animated pictures as part of the variety programme. The King’s Theatre became a full-time cinema in 1908 and was re-named Scala Cinema in 1913.

Inside the auditorium seating was provided in stalls and circle levels. There were long slips containing seats along the side-walls extending from the front of the circle to the proscenium arch. An unusual feature was that the entrance to the circle was gained via a staircase, which opened up at the proscenium end of the right-hand side slip, which mean’t the audience entered and walk away from the screen to their seats. The auditorium ceiling was barrel vaulted and there were elaborate plaster decorations on the front of the circle and its side slips. Due to these slips, the proscenium was restricted, however, when CinemaScope was installed in 1955, it managed to install a 24 feet wide screen.

The Scala Cinema was purchased by the Classic Cinemas chain in April 1964, and they operated it as a news and cartoon cinema.

It was converted into a 3-screen cinema in 1972, with two of the screens seating 372 and 98 screening regular film programmes, and the third screen seating 94 was named Tatler Cinema Club, screening uncensored adult films. By 1979, all three screens were showing regular films.

The Classic was closed on 18th September 1984. It was converted into a Mock Medieval Tavern. The auditorium was demolished in 1989 as part of a central re-development scheme, and the frontage and foyer area was demolished by 1991. The site is now an entrance to a car park.

Some time in the 1980s the owners of nearby record store, Selectadisc, tried to buy the Classic with the intention of turning it into an arthouse cinema with “…music, food, drink and DJs etc.”