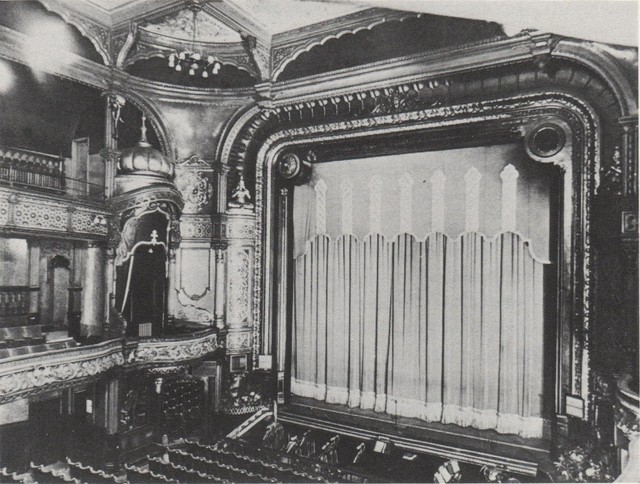 In 1897, noted theatre architect Frank Matcham was employed to re-design the historic Theatre Royal, Nottingham’s main playhouse. He was comissioned by variety theatre owners Oswald Stoll and Edward Moss to build a new variety theatre adjacent to the right of the Theatre Royal. There was a stage ‘pass-door’ between the two theatres.

The Empire Palace Theatre was opened on 28th February 1898, and Matcham had designed the theatre with an Indian Palace style interior. The ceiling was ‘supported’ on each corner by elephant heads, and there was a glass sliding roof in the centre of the ceiling. Seating was provided for 259 in the front orchestra stalls, 182 in the centre stalls, 199 in the rear stalls, 83 on long benches in the pit, 340 seats in the dress circle and 700 on long benches in the gallery. There was also a large box flanking each side of the proscenium, with each box seating 6 persons, there were also six boxes located at the rear of the dress circle, each seating 4 persons. The boxes were topped by a decorative ‘onion’ style dome. The proscenium was 30 feet wide and the stage 26 feet deep. There were ten single dressing rooms and one chorus room for 16 artistes. The theatre was equipped with a fireproof Bioscope projection box, and Bioscope films were screened as part of the opening night programme, and continued for many years into the 1910’s.

Many famous artistes appeared on the stage of the Nottingham Empire Theatre, including; Dan Leno, Marie Lloyd, Harry Tate, Albert Chevalier, Lily Langtree. The idea to team up the Crazy Gang was inspired in this theatre. During World War II artistes included; Arthur Askey, Jewell & Warriss, Tommy Trinder, Anne Shelton, Vera Lynn and Phillis Dixy. Into the 1940’s and 1950’s the stars continued to appear; Laurel & Hardy, Billy Cotton & His Band, Eddie Calvert, Morecambe & Wise, Julie Andrews, Harry Worth, Ken Dodd and Des O'Connor. During its last years, it was staging what seemed like an endless stream of weekly striptease shows. The Empire Theatre was closed by the Moss Empires chain in June 1958.

The building stood empty and unused for over a decade, and was demolished in 1969. An extension to the adjacent Theatre Royal containing new modern facilities was built on the site.

I have looked all over the Internet in the hope of finding a little about this theatre, where my uncle was electrician.I would dearly like to have some pictures of the inside if anybody has a print or two. This is the first clear picture I have seen of the outside. This theatre often held pantomimes, as did the Royal of course and it also presented ice shows. According to my uncle the Ice Shows took from curtain down on Saturday night until Monday morning to set up.

There is additional historical information about and and a photo of this theatre on this webpage (scroll down a bit).

1952 poster added for a Laurel & Hardy live appearance at the Empire. Found this article as well.