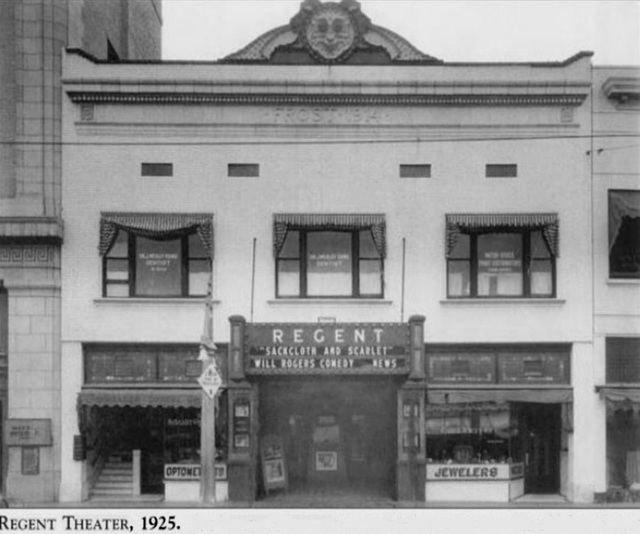 A Los Angeles Times story from May of 1914 said that Riverside developer George Frost was building a $75,000 theatre at this location. It opened November 13, 1914. In April of 1915 the Times said that the Regent Theatre, and all of Frost’s properties, was being sold. The Regent Theatre, listed in the Film Daily Yearbook with 800 seats, adjoined the First National Bank at the southeast corner of 8th Street and Main Street. Main Street is now a pedestrian mall and 8th Street was later renamed University Avenue. According to information found at the Riverside Public Library, Roy Hunt purchased the theatre, which is across the street from the Rubidoux Theatre, in 1924. Roy Hunt is noted for partnering with West Coast Theatres in Riverside, most notably to build the Fox Theatre in 1929.

In 1928 the Kress five and dime store opened on the site, with the façade redone in Kress’ distinctive style. It is not known how much of the remaining original Regent Theatre remained after the renovations.

In 1988 the University of California Riverside, California Museum of Photography opened in the building.