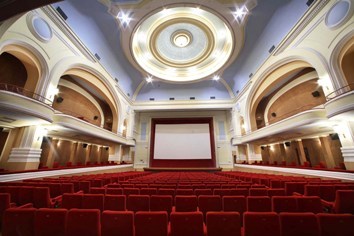 Located in the centre of Athens, close to the Parliament building. This elegant Neo-Classical style building was built in 1870. It was converted into a theatre in 1904, and became a cinema in 1912. Seating was provided in orchestra and balcony levels.

The Attikon Cinema was one of the host cinemas for the annual Athens Film Festival and was operated by Cinemax Class. The building was petrol bombed by rioters on 12th February 2012, the fire caused considerable damage. “Tinker Tailor Soldier Spy” was the last film shown.

The adjacent Apollon Renault Cinema, a single screen art house cinema in the same building (opened in the 1960’s) was also a victim, as was the nearby Asty Cinema.

There’s no indication anybody was inside the cinemas. This one & Apollon were probably totally destroyed. The historic building housing them was one of the most beautiful in Athens! another photo of it on fire & blog: http://www.ekathimerini.com/4dcgi/_w_articles_wsite3_1_13/02/2012_427392

Photo of the remains of the cinema the day after the fire: http://gma.yahoo.com/photos/firefighter-extinguishes-one-capitals-oldest-restored-cinemas-central-photo-112735944.html

Here is a link and a few excerpts from an article which states the cinema was still open recently http://www.couriermail.com.au/ipad/riots-leave-athens-smouldering/story-fn6ck55c-1226270276396 A LANDMARK Athens cinema lay in ruins yesterday as stunned Greeks surveyed the damage of widespread riots. Officials say 45 buildings were wholly or partly destroyed by fire as violence erupted during demonstrations while parliament voted on Sunday for tough new austerity measures aimed at averting national bankruptcy.

“It’s culture that has gone up in smoke,” filmmaker Nikos Kavoukidis lamented as he shot footage of the crowd gathered at the ruins of the Attikon cinema. “What do we have left? Television and football?”

The Attikon was housed in a neo-classical building dating back to the late 19th century. The cinema was famed for its sumptuous decor, plush red seats and the sweeping curves of its main auditorium.

This blog has an interesting assertion, that though part of the movie theater was destroyed, that the main hall was saved from the fire. http://athenswalker.blogspot.com/2012/02/athens-hooliganism-and-attikon-cinemax.html

Based on your comment of 02-12-12 with the link to the photo of the fireman extinguishing still smoking embers, I think the blog entry is (sadly) wrong. Some other articles about the damage caused by rioters say the building was gutted.

Correct, unfortunately not saved from fire, here are photos of its destruction followed by 2 articles & a link we can only hope comes true…. http://www.demotiximages.com/news/1051923/attikon-cinema-day-after-riots-athens

http://www.eyeforfilm.co.uk/news.php?id=726 excerpt- The riots in Athens have claimed a historic victim – the 19th century Attikon cinema, famous as one of the city’s most beautiful new-Classical buildings. The key venue for the Athens International Film Festival, it attracted film fans from around the world every September and was a popular destination for tourists at other times of year.

With its sweeping galleries, arching sky-blue ceiling and lush red velvet seats, the cinema was admired by lovers of film and architecture alike, but today all that remained was a smouldering ruin following an arson attack. It had been operating as a cinema since 1912 and the previous night had been screening Tinker Tailor Soldier Spy.

http://greece.greekreporter.com/2012/02/14/attikon-the-death-of-a-cultural-icon/ entitled “Attikon: The Death of a Cultural Icon” ATHENS – As Greeks awoke on Feb. 13 after a night of violence and arson that destroyed 45 businesses in the capital city, they saw nothing was left of one of its most historic venues, the Neo-Classical building that housed the century-old Attikon theater, one of the lushest old movie palaces in Europe, gone now with the ashes that flitted into the night air like celluloid film burning away. It burned along with the adjacent Apollon, restored half a century ago.

A few hundred anarchists infiltrating a crowd of more than 100,000 demonstrators, protesting more austerity measures being imposed by the government so that international aid to keep the country from going bankrupt would keep coming, battled riot police deep into the night as Parliament approved more pay cuts for beleaguered Greeks. The firefights of Molotov Cocktails versus stun grenades and tear gas left Greeks, already inured to violence after two years of protests, riots and strikes, shocked at what they saw in the morning after: banks and businesses gone, livelihoods lost, more people out of work in a country with more than one million unemployed, and the movie theaters where many went to escape the misery of reality in modern Greece reduced to a pile of smoldering debris.

Not lost on most is that the Attikon and Apollo were nearly adjacent to the burned-out hulk of a former Marfin Bank branch that was firebombed by arsonists on May 5, 2010 in the first major riot against austerity. It killed three bank workers trapped inside, including a young expectant woman. No one has been arrested for those murders and riot police watched the movie theater burn away too. The beautifully restored Apollon, a historic 1960’s theatre, and the Attikon just next door, operated year-round showing the latest releases, and also hosted the Athens International Film Festival.

In a city filled with filthy, grey concrete buildings, the Attikon was one of the few neo-classical buildings left, and during the economic crisis had begun offering 2-for-1 admission ticket nights so that Greeks with little disposable income left could get away from their everyday lives and disappear into a movie. It dated back to 1870 and was a mainstay on one of the city’s main avenues, Stadiou Street, where one in four stores has closed during the last five years of recession, and was just around the corner from another theater that was burned, the Asty, whose owner said he was warned by anarchists earlier they would torch his business unless he paid a huge sum in protection money.

Ironically, the Attikon had survived occupation by the Nazis during World War II, who left it alone, while the Gestapo used the underground Asty as a torture chamber. It is adjacent to a WWII museum now gone too. The Attikon began operating in 1912 – now dead on its 100th anniversary. It was reminiscent of the golden days of movie palaces, with thick, lush seats, a giant screen, balcony and side boxes, luxurious and comfortable, a place where you could sink into your seat, the antithesis to boxy mall cinemas, a testament to a time gone past, which it now joined.

Anarchists roam at will during the protests in Greece, looting, burning, killing and destroying banks and buildings and luxury car dealerships. None have been arrested as Greeks complain that police instead apprehend innocent protesters. The perpetrators are not hard to spot: they come to their work wearing hoods, face masks, and often carrying barrel staves or other wooden poles with which to battle police.

Nikos Konstandaras, the respected editor of Kathimerini newspaper, wrote that what Greeks lost in the fires was more than just buildings. “The neoclassical building that housed the Attikon cinema was one of the most beautiful in Athens, among the very few that reminded us of what our city could have become if we had respected its past, if we cared about its present and its future. Perhaps it was a fitting sacrifice – a symbol of our rush to destroy because we cannot create, an expression of our need to abandon memories and pass into the future, blackened with ashes and rage,” he said sadly. Visitors also wrote lovingly of their time at the Attikon, as one earlier noted during an on-line review, stating, “The service was great the atmosphere fantastic and the surroundings were very nice.” It was a site recommended to tourists by the travel guide Lonely Planet, and now it has been lost.

With lit candles in their hand and tears in their eyes, a crowd of sorrowful citizens gathered outside Attikon yesterday to mourn the cinema’s destruction. Among the Athenians in the crowd who had fond memories of watching movies at the Attikon since they were children, were a number of artists who came to commemorate the building’s significance for the arts in Greece. In addition, reporters from several international media outlets gathered to express their shock and dismay at the burning of the Attikon, and wondered if it was really necessary for such a historic and culturally significant building to be destroyed as a result of Greeks’ rage against the government and additional austerity measures.

http://www.idahostatesman.com/2012/02/13/1992173/greeks-clean-up-after-riots-against.html This AP & other reports reveals that the rioters selected the neoclassic buildings central Athens leaving the new buildings that many characterize as “dirty concrete building”

Here are excerpts" Police said rioters destroyed or damaged more than 110 buildings, of which 50 were burned. They included nine listed as national heritage buildings, mostly in the neoclassical style, while 30 stores were looted.

Smoke still rose from the remains of a landmark 1870 building which had housed one of the capital’s most loved cinemas, the Attikon, since 1916. About 100 people held a candle-light protest outside the gutted structure late Monday.

“Criminals targeted all that was best in the city of Athens, its neoclassical monuments,” said Thanassis Davakis, cultural policy chief of the conservative New Democracy party, a coalition government partner. “The damage must be swiftly redressed and the city’s memory restored.”

“(The rioters) intentionally picked traditional buildings to burn,” New Democracy leader Antonis Samaras said. “These scum must know that when the time comes I will rip off their hoods.”

Let’s hope they mean a restoration so it looks like the photographs. http://www.athensnews.gr/portal/1/53299 6. REBUILDING CINEMAS The government will fund the reparations to the neoclassical building housing the historic Attikon and Apollon cinemas, in central Athens. Culture and Tourism Minister Pavlos Yeroulanos announced the decision at yesterday’s cabinet meeting. The two cinemas were seriously damaged in an arson attack during Sunday’s riots in central Athens.

Fortunately, the halls of the two theaters are safe. What was destroyed and needs restoration is the entrance. Unfortunately, because the building is characterized as historical, there is a lot of bureaucracy to approve restoration. That means many years to come…