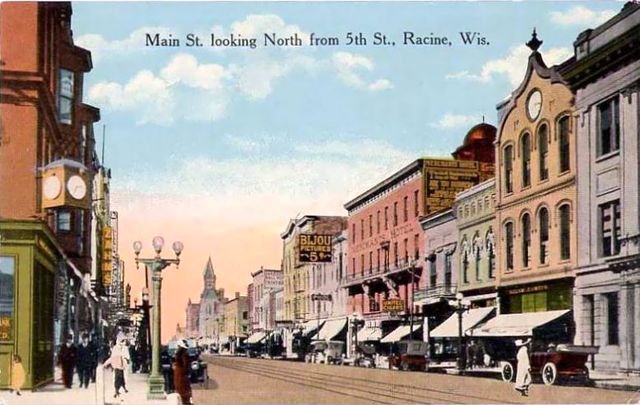 (Racine WI SUNDAY BULLETIN, June 12, 1960, with 4 photos) This building, now the Hotel Nelson, carries a long list of “firsts” for Racine, including the “Bijou Theatre,” the city’s first vaudeville house. A poster offered “50-cent Shows for 10 cents.” The theater occupied the building’s first floor in 1905.

A Downtown property at 3rd Street and Main Street carries a long list of “firsts” for Racine County. The property, at the intersection’s northeast corner, is now the site of the Nelson Hotel Restaurant, but in 1906 it was the Bijou Theater. Its stage held Racine’s first vaudeville shows. Names of the acts on the bill were lettered on glass slides, inserted in the frame at the stage’s left, and illuminated from inside the frame as acts went on. The vaudeville shows were sometimes interspersed with motion pictures or an illustrated song.

During the last 123 years it has been built up this list of “firsts”:

When the site was sold for $500 in 1837, it was the first deed recorded in Racine County. The land was purchased by Elias Smith and William H. Waterman, the county’s register of deeds.

Bradley and his boys were ousted 20 years later and the school house was torn down. Built on the site in 1858 was the McClurg Building, a brick and steel structure which now stands on the property, the state’s first fireproof structure. It was the only building to survive the great Racine fire of 1882. The new building first housed the general offices of the county’s first railroad, the Racine, Janesville and Mississippi line.

The property was purchased by M. M. Secor shortly after the fire. It became known as the Secor Block, after the mayor. Set up in the building was the first turkish bathhouse in this section of the country. The bathhouse was furnished with the most modern equipment available then and continued in use until 1941.

Meanwhile, the second floor was rented to the county and was used for the first advocate’s office. On the main floor the First Bohemian Bank of America, which went out of business in less than a year, was established.

The first public library in the county was set up in the building in September of 1897, when 3,439 volumes were housed on the first floor.

The first municipal court in the county, with Judge David J. Flett presiding, was set up on one of the upper floors at the turn of the century.

Downstairs, William C. Tiede built the county’s first vaudeville theater. The first vaudeville bill featured Brandy and Wilson, the team that originated the dancing fad of the early-1900’s, the “Brandy step”. Tiede introduced the first motion pictures to Racine and combined the movies with vaudeville. His first picture was “The Great Train Robbery”.

An eating establishment was moved into the first floor shortly before the outbreak of World War I. Vocational school classes continued to be held on the second floor until 1921.

Does anyone know if this is still standing ? And what is there now ?

Still there in 2018 as the Divino Gelato Café. The balcony is still intact; see photo.