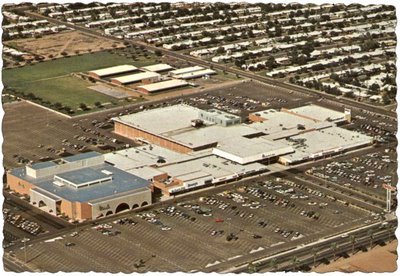 The Mann Tri-City Theatres was operated by Mann Theatres and opened May 15, 1987. It was later taken over by Harkins Theatres and was closed in 1998.

I went here a couple of times to see $1 movies in the spring of 1989. “Who Framed Roger Rabbit” was showing in auditorium #4, so it was at least a 4-plex. This blog states that it had “six multiplex screens”:

According to Wikipedia, when it opened in 1968, Tri-City Mall was the first enclosed shopping center in the East Valley region of the Phoenix metropolitan area. The mall closed in 1998 and was demolished to make way for a new strip mall shopping center, Tri-City Pavilions. The last standing Tri-City Mall store (the gutted remains of JCPenney) was demolished in April 2006 to make way for a light rail transit station.

A good aerial postcard shot of the mall can be seen here: http://3.bp.blogspot.com/_wS7qhfsw7LU/TFdwF7YWonI/AAAAAAAAAgo/CviD9vOppgs/s1600/Mesa_Tri-CityMall.jpg

I went to a couple of movies here back in the late 80’s and early 90’s. Nice theater. It was a dollar theater by then. Used to go to the restaurant in the parking lot there after we would watch a movie. Good times.