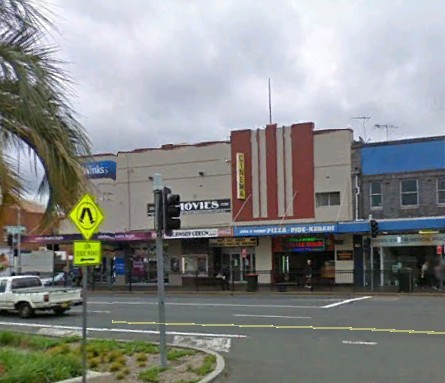 Located in the Hornsby district of Sydney. Opened as an open air theatre in 1912 as the Hornsby Picture Theatre with 653-seats. It was rebuilt in 1924, reopening as the Hornsby Theatre. In 1937 a 540-seat dress circle was added to the 1,080-seats in the stalls giving a total seating capacity of 1,620. In the 1970’s the stalls seating area was converted into retail use. The former dress circle was taken over by Village Cinemas. Around 1999 it was re-named Hornsby Odeon Cinema.

Recent technical upgrades include: Installation of full HD Christie Digital projection equipment coupled with the only certified Dolby 7.1 surround auditorium in Sydney. No more scratches, missing sections of the movie, or noisy soundtracks, a crystal clear sound and picture every session.

The original theatre on this site was an open-air type, owned by Buck Buchanan. It had corrugated iron walls and deck chairs, showing silents accompanied by piano and violin. Sold in 1923 to David Glover who built a new theatre. It had stalls in the lower level (now shops) and the upper level had the lounge, dress circle and several balconies. This building survives today and is closing in on its 100th birthday.

The Odeon opened in 1914 as Hornsby Cinema with the foyer on street level. The cinema was rebuilt in 1921 and again in the 1930s when art deco was at the forefront of building design. The cinema retains its facade on Hornsby’s ‘old side’ and was named The Odeon in the mid-90s.

The Odeon claims to be the only single-screen cinema left in Sydney.

Opened as a open air theatre called Hornsby Picture Theatre in 1912. Rebuilt in 1924 and reanamed Hornsby Theatre. A dress circle was added in 1937. In 1954, there was 1080 seats in the stalls, and 540 seats in the dress circle. In the(1970s?) stalls converted shops, and cinema ran only in the dress circle(500 seats). Purchased and ran by Village in(late 1970’s?). In 1985 purchased by GIO Insurance who moved into the downstairs retail area, the cinema closed for 18 months. Closed on 14/5/1997. Reopened in(1998 or 1999?) and renamed Hornsby Odeon(474 seats). Hornsby Odeon is the only operating single screen cinema in the Sydney metropolian area. The insurance store is now an electical retailer(name unknown?)