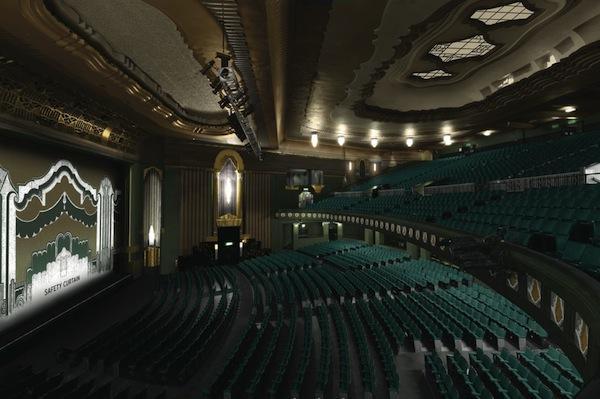 Located in the west London inner-city suburb of Hammersmith. This is one of the UK’s largest and best-preserved super cinemas. Designed by architect Robert Cromie for a joint collaboration between exhibitor Israel Davis and the Gaumont British Theatres chain (in 1928 he designed the magnificent Davis Theatre, Croydon for Israel Davis which has its own page on Cinema Treasures). This was originally planned to also be named Davis Theatre, but it opened as the Gaumont Palace on 28th March 1932 with 3,487 seats. The opening programme was Tom Walls in “A Night Like This” and Helen Twelvetrees in “Bad Company”. On the stage was “Our Easter Egg”-a ‘Grand Stage Spectacle’ with 80 performers. De Groot conducted the Gaumont Palace Symphony Orchestra. It was equipped with a large stage that is 35 feet deep, which has proved to be the buildings reason for survival. The proscenium is 63 feet wide and there are twenty dressing rooms. The Gaumont Palace is also equipped with a Compton 4Manual/15Ranks theatre organ which was opened by organist Leslie James. There was also a café/restaurant located on the balcony foyer area.

The enormous width (192 feet) of the site allowed Robert Cromie to provide an excellent fan shaped auditorium which for its size is remarkably intimate. The rear of the circle is 170 feet wide and the circle only overhangs the stalls by 10-12 rows providing excellent sightlines from all parts of the house.

The Art Deco style decoration in such a large auditorium is slightly underpowered but nevertheless this is an outstanding, nearly unaltered, example of cinema architecture and is Robert Cromie’s finest surviving cinema.

It now seats 3,419 with standing room for 302 more. It is well used for concerts, opera, ballet and musicals. (“Riverdance” had a two-year run here).

In 1961 the Gaumont hosted a Top Rank Bingo Club on Sunday afternoons. The building was renamed Odeon in 1962 and it screened its last regular film as a full-time cinema on 8th August 1984, Roy Scheider in “Blue Thunder”. Live shows/concerts became the main programme content, with occasional films slotted in to fill empty dates, such as in 1988, when “Who Framed Roger Rabbit” and “Imagine” were a couple of examples. It became the Apollo in 1992. It is available for sponsorship and the name gets the sponsor prefixing the Apollo (e.g. Labatt’s Apollo or Carling Apollo) in recent years.

By 2005 it was operated by Clear Channel, they were encouraged by Hammersmith & Fulham Council and the Cinema Theatre Association to reinstate the original Compton organ console which had been removed from the building and put into storage in the 1990’s. The organ chambers were retained in the building and now with it’s console connected up again it is again playable. From June 2007, the theatre was operated by the MAMA Group. In December 2009, the theatre was equipped with 2K digital projectors and a collapsible screen. It was taken over by HMV, and in 2012 was taken over by the German/American company Stage C, who purchased the building for £32 million.

In June 2013 the theatre was closed to enable a complete 5 million Pounds renovation and restoration to the plans of architectural firm Foster Wilson, bringing the building back to its original 1932 condition. The work restored the original foyer floor mosaic panels, long covered by carpet. Black paint was removed from the glass of the Art Deco style windows so that light can once again flood the circle bar and foyer. The theatre’s interior was repainted in the original colour scheme of green, mauve and black. There are new bars, and seats in the stalls and seats in the circle have been raised and reupholstered to improve comfort and legroom. Two marble staircases concealed beneath the extended stage for many years have been uncovered. It re-opened on 7th September 2013 with a concert by Selena Gomez and is re-named Eventim Apollo as it is now owned by AEG Live and German ticket vending company CTS Eventim. On 24th April 2017 the European Premiere of “Guardians of the Galaxy Vol.2” was held in the theatre. On 8th February 2018 the European Premiere of “Black Panther” was held at the Eventim Apollo Hammersmith. On 16th July 2018 the World Premiere of “Mama Mia! Here We Go Again” was held at the theatre, with stars Cher, Meryl Streep & Pierce Brosnan attending in person.

I worked here in the early 1980’s not a good time for a cinema they had 2 clapped out Vic 10s with knackered gearboxes that leaked oil as fast as you could fill them, carbon arc and mercury rectifiers out in a shed on the roof it was like running a cinema with equipment from the arc. The rake on the projectors had them almost standing on their lens, the portholes were about a foot from the floor making change overs a nightmare. All capped off with the most rude crass useless chief I had ever worked for and a senior that (really) could not tie his own shoes (brother in law). They were only interested in the live shows.

Many of the big old Gaumont theatres had projection rooms that were at the rear of a recessed oval in the ceiling. This mean that for many of them, the projectionists had to cross the roof of the building to get to the projection room. Sometimes the rake of the projectors was so steep the screen had to lean backwards, making it difficult for people in the front of the main floor to watch the movie. I find it difficult to believe that this is the best the architects could do when they had a 2500-3000 seat building to work with. A projection room over the rear of the balcony would have been a far better solution and would not have reduced the number of seats.

There is a 7 minute YouTube video of the Hammersmith Odeon projection room in 1987. It’s under “Odeon Hammersmith” but if you add “projection” it will be the first video listed.

I was a Manager here for 3 years from 1969 – 1971. It was very hard work to run this large building which had a capacity of 3500 and with two shows a night giving a total of 7000 through the doors took a great deal of organising. I still have great memories from those days. I was very pleased to write the report that saw this magnificent building up listed to Grade II* on the 27th July 2004.

Live within walking distance and happy that its listed!

“A hand painted design created in the 1930’s was selected and served as inspiration for the final carpet design.”

Brintons Carpets also have uploaded a video with shots of the Apollo and (advertorial) background information on the new carpet design.

The Beatles did several Christmas shows at the Odeon Hammersmith. Below is both video and still shots from 1964 & `65.