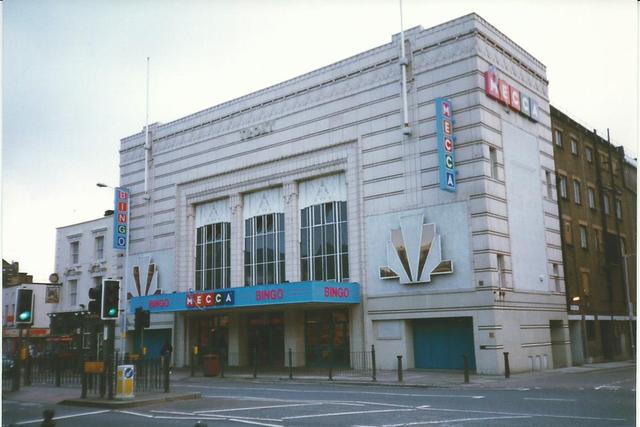 The Troxy Cinema in Stepney, east London, was one of the UK’s largest cinemas with 3,520 seats. The building almost occupies an island site, the adjacent Brewery Tap public house occupies one corner of the site and is considerably older than the Troxy Cinema.

The Troxy Cinema opened on 11th September 1933 with Fay Wray in “King Kong” and Warren William in “The Mind Reader”. It was designed by George Coles for the Hyams & Gale circuit and came equipped with a very large 40ft deep stage which contains 3 revolving sections of the stage and an inner revolving centre. There are a good number of dressing rooms. The proscenium is 60ft wide. It was equipped with a Wurlitzer 3Manual/10Ranks theatre organ that was opened by noted organist Bobby Pagan. There was also a café/restaurant provided for the convenience of patrons which was located on the circle foyer level.

Wartime damage and slum clearance removed a large part of the local population and the vast cinema closed on 19 November 1960 with Donald Sinden in “The Siege of Sydney Street” and Michael Wilding in “Hello London”.

The building remained empty and unused for almost three years until 1963, when surprisingly, a tenant was found and the London Opera Centre was created in the Troxy Cinema. Run by the Royal Opera House, Covent Garden, the Troxy Cinema was renamed the London Opera Centre and used for rehearsals on an extended stage which was an exact size of the Royal Opera House stage. Scenery construction took place in the rear stalls area under the circle and storage space was created in the rear of the circle. A small 500 seat area was created in the front of the circle for occasional performances. This conversion was carried out by George Coles and Company.

This lasted until around 1990 when the Opera House vacated the building. The Troxy Cinema was given a Grade II Listed building status by English Heritage in January 1991.

Following this designated status, the Troxy Cinema was restored to its original volume as a Top Rank Bingo Club. Later a Mecca Bingo Club, bingo use ceased in May 2006 and the building was converted into a banqueting suite in early-2007. Despite a great deal of money spent converting and restoring the building, the venture was initially not as successful as the operators thought it would be.

On 29th November 2008, the Troxy Stepney began use as a concerts and live performance venue with Nick Cave & the Bad Seeds playing to a sell-out audience. In April 2009, the Troxy Stepney concerts were continuing, and it also added use as a nightclub, with a 3,100 capacity. It hosted the gay night ‘Salvation’ on Sundays.

In December 2009, it was announced by the Cinema Organ Society, that the Wurlitzer 4Manual/24Ranks organ, which had originally been installed in the Trocadero Cinema, Elephant and Castle in 1930, would find a new home at the Troxy Stepney, and installation began in 2010. The first organ concert on the restored instrument took place on 22nd August 2015 with organists Richard Hills & Robert Wolfe presenting “A Night of a Thousand Pipes”.

On 12-18th February 2012, the Troxy Stepney screened its first film after 52 years! The Noel Coward film “Brief Encounter” starring Trevor Howard was screened with a programme including live music and an organist (although not playing the Wurlitzer as at that time it was still being installed.

My mother who is now 80 years old used to sing on the stage at The Troxy in the early 1940s. She grew up in the East End and was one of eleven children. Her name was Annie Reed and stands only 4ft 10 inches tall, with ringlets in her hair. I would be interested to hear from anyone who maybe remembers her or if anyone has any advertising relating to the shows.

Another view of the Troxy – showing the pub that seemingly refused to go away when the cinema was designed!

Walter Forrest, the nephew of George Coles, told me an amusing story about the chimney of the pub referred to above. If you look at the photo you will see that the stack rises up against the side wall of the Troxy. Fire regulations dictated that the stack had to be above the level of the adjacent building. Apparently, its length and height caused such a draught that it was impossible to sit by the fire reading a newspaper without the paper being sucked up the chimney. The architects were called back to remedy the situation!

Mecca Bingo moved out of the former Troxy Cinema building in late May 2006 and all signage has been removed. It is to be converted into a banqueting hall.

The Banqueting Hall is now open. These are September 2007 photos:–

A photograph of the auditorium, looking back from the front stalls in June 2008:
View link
Close-up detail of the organ grille in the splay wall, adjacent to the proscenium:
View link

Some recent photos of the Troxy (taken October 2103) here:–

Was at the Troxy last night for the opening of the WurliTzer organ and it was Fantastic.The theatre was too,but only later on did i notice that the foyer is no longer the original double height shown in the original photo.It now has a false ceiling with i presume a big void above it presumably done when the building was a bingo hall.I wonder if they have any plans to open this space back up?