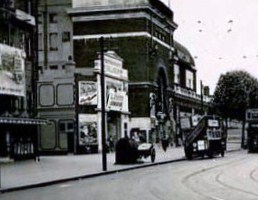 Located in the west London inner city district of Shepherd’s Bush on the west side of Shephard’s Bush Green and sandwiched between the Shepherd’s Bush Empire Theatre(1903) and the Pavilion/Gaumont/Odeon(1923). Designed by architectural firm Gilbert & Costanduros, the Shepherd’s Bush Cinematograph Theatre opened 3rd March 1910. This was the 6th addition to the Pyke Circuit of cinemas which Montagu Pyke had started in March 1909 and which was an instant success fuelling the rapid expansion. A further 10 cinemas were built, the final one in Charing Cross Road opening in August 1911. Along the side of the building (on the Shepherd’s Bush Empire Theatre side) was a long stone panel which had ‘Cinematograph Theatre - Continuous Performance - Seats 1/- 6d 3d’.

It was partially rebuilt to the plans of architect John Stanley Beard and reopened in November 1923 as the New Palladium Cinema, the New was dropped in 1946 and it was renamed Essoldo in 1955. It closed for modernisation in 1968 which gutted the auditorium, but a fire just before reopening delayed the event. It now seated 500, down from its original capacity of 763. Further name changes occurred; Classic from 1972 and finally Odeon 2 from 1973 to its closure in October 1981.

After a period of dereliction, the interior was gutted and it was converted into a large pub with an Australian theme know as ‘Walkabout’, which closed on 6th October 2013. The building was then used as a construction site office for building workers employed on the conversion of the adjacent former Pavilion/Odeon into a hotel. The Odeon 2 Shepherds Bush was demolished in May 2019, with only the façade left standing and the Palladium name returned, which has been used as an entrance to a block of flats that have been built on the site. Sadly, the fate of the long stone panel on the side of the building is unknown. It was hoped that this rare example of a piece of cinema history would be preserved.

I use to be relief projectionist with Fred Donovan in the 70s.
It was right next door to the BBC Theatre and we use watch some great celebrities go there from the steps outside the projection room.I think it had 70mm at one stage.
Shaun Cassidy,Osmond Brothers,Bruce Forsythe,Michael Parkinson etc.
It was a flat floored cinema on one level.
I live in Auckland New Zealand now and manage hotels.
Paul

Hi!kiwidownunder,I have a reply to your comment on the CORONET page.
Andy,London.

Original lettering dating from 1910 is still to be seen on the side-wall of the former Pykes Cinematograph Theatre in this October 2005 photograph:
View link

The cinema did have 70mm. The Walkabout pub which was the last use for the building closed in October 2013 and the site is going to be developed. I think the new owners are the same people that bought the Odeon (Pavillion)cinema next door which they have demolished to build a hotel. John

I was an electrician working on the Essoldo when it burnt down in 1968. We used to do a lot of cinema refurbs. We had been home for the weekend back to Nottingham and when we arrived at our works with tool box and suit case on Monday morning ready to come back down, we were told “the jobs off, as it had been on fire the night before”. Needless to say we were concerned as fires were usually blamed on electrical faults and we had spent some time rewiring the place. We had a lot of trouble with it break-ins At Shepherds Bush. There was one such break-in where they got into the projection box and smashed the projector lenses, fortunately they didn’t find the mercury arc rectifiers otherwise there would have been a terrible mess not to mention the cost of replacement. The fire was eventually blamed on a tram breaking in and setting a fire. We never went back and I thought it had been demolished. I can remember the stars arriving at the BBC TV theatre next door, a regular, complete with a bevy of girls was Lionel Blair, I think in a large pink? convertable. The BBC World service was housed in Bush house on the opposite side. I don’t think we were replacing the projection or sound systems in that cinema but we did in others.

The former cinema has now been reduced to a shell. Plans to demolish the cinema and build apartments on the site was turned down by the council in June 2015.

The original architects (in 1910) were Gilbert and Constanduros who designed others for Montague Pyke.