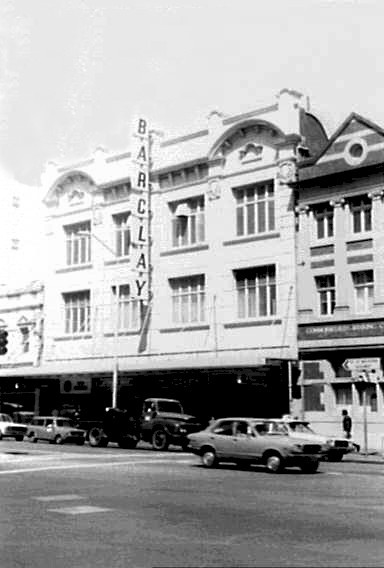 Located in the centre of Sydney in the Haymarket district on George Street almost at the corner of Hay Street. Operated variously by Hoyts and Greater Union chains. The Haymarket Theatre was opened on 29th April, 1916. It went to cinema use when Greater Union re-named it Civic Theatre on 29th September 1933, specializing in only Australian made films and opening with “The Squatters Daughter”. In 1938, Greater Union began to operate it as a live theatre, but it suffered from the Haymarket location which was not the place for a classy theatre. Every now and then live shows were booked such as “The Harlem Blackbirds” and the “Gypsy Rose Lee Show”.

It ran double bills western and horror films, much like the Lyric Theatre nearby. As the Palladium Theatre it tried live drama with the “Caine Mutiny Court Martial” with Lloyd Nolan and Ken Wayne.

Greater Union had no theatre suitable for 70mm, so the theatre was given false interior walls which were draped and a new name, the Barclay Theatre, said to be the maiden name of GU chief Sir Norman Rydge.

The Barclay Theatre opened in December 1962 with a huge hit, “The Guns of Navarone” and did well with “Lawrence of Arabia”.

As Haymarket flourished the theatre was doomed along with all the other George Street theatres and was demolished.

I remember seeing a double feature of Jaws and Jaws 2 at this beautiful cinema in September 1981. It had such lush blue/purple interiors and I always felt it was out of place in this more run down end of town. I also remember seeing The Great Waldo Pepper here in 1975. Good memories.

The Barclay was named for Sir Norman B. Rydge’s wife whose maiden name was Barclay.
Seating was reduced to 950 after the new shell was erected in 1962.

Added to Photos: a shot of Nat King Cole who was appearing in the Harlem Blackbirds show although he got no billing on the front of house. Several cast members were photographed taking time off at various locales like clubs and the children’s hospital.

WHat a top projection room to work in fully soundproofed .A rare setup with a pair of canica vic 8:s and one Kalee made presentation easy if running a70mm print with 35mm ads & trailers.I recall a Saturday dayshift the dimmer for main house lights smoked up ,the only temp fix while show was on was to get afew wire coathangers from the locker room[yes there was a change room probably the old generator before referb &fitting rectfiers]and bridge the blown sections.TRY DOING THAT TO YOUR SOLID STATE AUTOMATED DIMMER,arh those were the days

The timing in this article is incorrect. The premiere of The Squatter’s Daughter was 29 September 1933, which was when it was renamed the Civic Theatre. It had already abandoned its all-Australian policy by 1935.