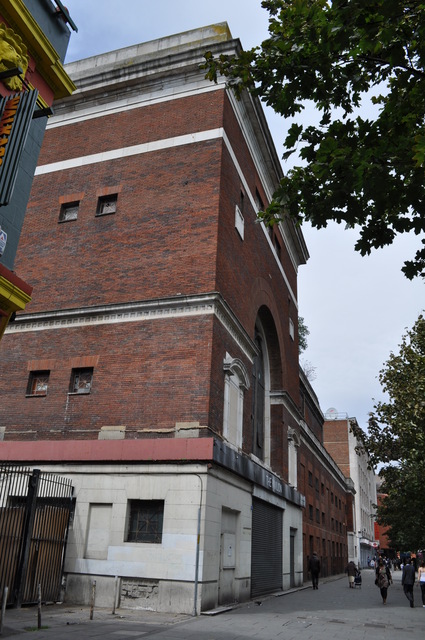 The Pavilion Cinema in the west London inner city district of Shepherd’s Bush, was designed by Frank T. Verity for the Israel Davis chain Davis Pavilion Circuit. It opened on 16th August 1923 with Norma Talmadge in “Within the Law”, a Felix the Cat cartoon and a ballet on the stage, performed by Anton Dolin & Company. The Compton 4Manual/17Rank organ was played by G.T. Pattman and Quentin McLean. Seating was provided for 1,450 in the stalls and 850 in the balcony. The proscenium was 70 feet wide and the stage 20 feet deep. There were four dressing rooms. The auditorium was decorated in an Italian Renaissance style.

It has a massive brick and stone frontage onto Shepherd’s Bush Green that won the RIBA London Street Architecture Award for the best London façade in 1923 when Sir Edwin Luteyns was on the panel of judges. The award sited its ‘imposing structure of brick and stone in which the former material especially is used with great imagination’. This was at a time when cinemas were considered a cheap and somewhat tawdry pastime, so such recognition was surprising.

The Pavilion Cinema was taken over by Gaumont British Theatres in 1923 and they added another 2Ranks of pipes to the Compton organ. The Pavilion Cinema was badly damaged by a German flying bomb in July 1944, and it did not re-open until 25th July 1955. The former business partner of Frank T. Verity, and distinguished cinema architect in his own right, Samuel Beverley undertook the restoration of the exterior and a complete rebuilding and modernisation of the interior. The rather ornate Italian Renaissance style original was swept away and a reduced capacity of 2,036 was accommodated in the streamlined, and somewhat bland, replacement auditorium when it opened with a new name Gaumont Theatre. In 1961 it hosted a Top Rank Bingo Club on Sunday afternoons and evenings.

The next change came in November 1962, when the Gaumont became the Odeon, and on 31st May 1969, when it closed for reconstruction. The front of the balcony was extended forward horizontally to form a new 815 seat cinema with the screen brought forward to the outer edge of a recessed lighting trough from the old cinema. The former stalls area was adapted into a Top Rank Bingo Club. The foyers were modernised and an escalator added to whisk patrons up to the spacious foyer and bar at 1st floor level. It was then known as Odeon 1 (with the old Pykes Cinematograph Theatre/Essoldo q.v. next door becoming Odeon 2). Reopening took place on 7th March 1970 with Paul Newman in “Butch Cassidy and the Sundance Kid”.

Odeon 2 (next door) closed in October 1981 and the Odeon 1 closed on 17th September 1983 with “The Twilight Zone”. The upstairs cinema section sat unused for the following 29 years. Downstairs, bingo continued until 2001, when that closed as a Mecca Bingo Club. Then the entire building sat empty and unused.

However in 2001 plans for the building were being drawn up to refurbish it with an entertainment suite in the bingo part and a proposed restoration of the cinema upstairs in hand, but these plans came to nothing. New plans were proposed to convert the building into apartments and a hotel, but again by 2008, nothing had happened.

In early-2008, the building re-opened as ‘The Pavilion’, a concert and special events venue. This operated until 2011, when plans to build a hotel were approved, which would demolish the building, apart from the façade. Demolition began in April 2012.

The Odeon was given a Grade II Listed building status in 1974.

So many of Ranks former cinemas are now derelict eyesores

@ Davepring.. I hate to say it NOT just Rank…. The March of the Multiplex…. Gone are the days when Cinemas where run by people with passion for what they do… They are now sweet shops that also show films…

Demolition of the auditorium is now underway.

Drove past yesterday. Not much left…..

I worked here for Top Rank Bingo 1969/71 and remember the cinema reopening …am fairly sure Wendy Craig and possibly Mark Lester were at the event….Pete Murray opened the bingo club previously…always recall the building had a lift that went up to the roof…was also a managers flat in the building.