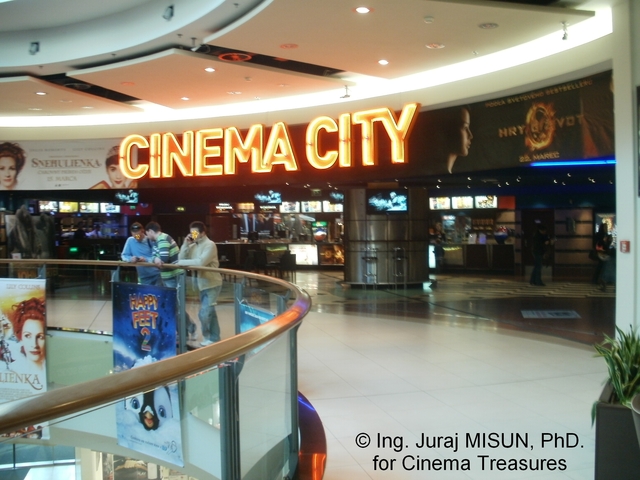 Cinema City Polus is the oldest multiplex cinema in Slovakia. Built in 2000 as a part of the shopping mall Polus City Center, the theatre was a member of the cinema chain Ster Century Cinemas owned by the South African company Ster-Kinekur. It opened in November 2000.

In March 2002 Ster Century Cinemas decided to sell its central European operations. The Israeli company Cinema City International acquired all Polish theaters. The Czech and Hungarian sites were sold to United Cinemas International (UCI Central Europe). However, the Polus multiplex in Bratislava was not a part of the deal because the Slovak antitrust office did not allow the concentration of both multiplexes in Bratislava (Palace Cinamas Aupark was already open and quickly became with its 12 screens the leader of the cinema market of the Slovak capital city). Two local movie distributors (Tatra Film and Attack Film) bought the Polus multiplex.

In 2009 nevertheless the theater became a part of the Palace Cinemas chain and re-opened on 10 April with premieres of the 20th Century Fox movies “27 Dresses” and “Horton Hears a Who”.

Finally, in January 2011 Polus became a part of the Cinema City chain.

Cinema City Polus has 8 screens and 1,607 seats. Just like in the other Slovak Cinema City theaters Polus uses the Master Image system for 3D-projections. It is the only multiplex cinema in Slovakia that offers premium seats with a higher comfort. Four screens have a total number of 42 premium seats (screen/premium seats: #3/8, #4/10, #7/8 and #8/16). The new operator decided not to demand higher prices for the seats. Currently (as of February 2012) there is not a cinema operator in Slovakia with a separate VIP-screen, so these premium seats are the most comfortable available.

The Polus site is at present probably the at least profitable of the three Cinema City theaters. An argument for this deduction is that the most promotions take place here. There is for example a 1+1 movie ticket promotion for a selected movie all week long or one free adult movie ticket with one child’s ticket Saturday mornings. Also the opening hours are shorter than in the sister sites - between 13:00 pm and 10:00 pm workdays.