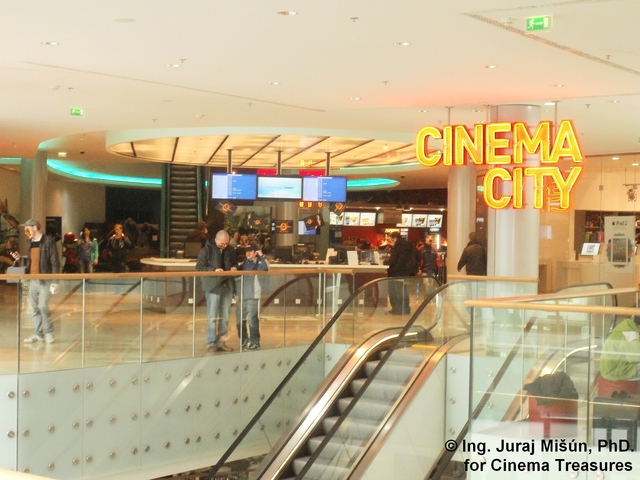 Cinema City Eurovea is the third and newest multiplex cinema in the capital city of Slovakia Bratislava. It opened as a member of the central European Palace Cinemas cinema chain, with sites operating in Czech Republic, Hungary and Slovakia. The theatre opened on March 26th 2010 with the public premiere of the DreamWorks movie “How to Train Your Dragon-3D”.

Not even a year after its opening it was sold along with other Palace Cinemas theaters to the Israeli operator Cinema City International and in the autumn of 2011 rebranded to Cinema City Eurovea.

The theater is a part of the new Bratislava multi-functional city quarter Eurovea and its shopping mall Eurovea Galleria. The site is located at the eastern end of the shopping mall, where a further extension of the city quarter is planned.

The theater has 9 screens and 1,607 seats. With this capacity it is the second largest multiplex cinema in the Slovak Republic after Cinema City Aupark (12 screens, 2,338 seats). It is also the only theater in Slovakia that offers love seats for couples. Love seats are in all nine auditoriums.

All screens were digitalized in 2011. The Eurovea theater is using the Master Image system for 3D-projections.