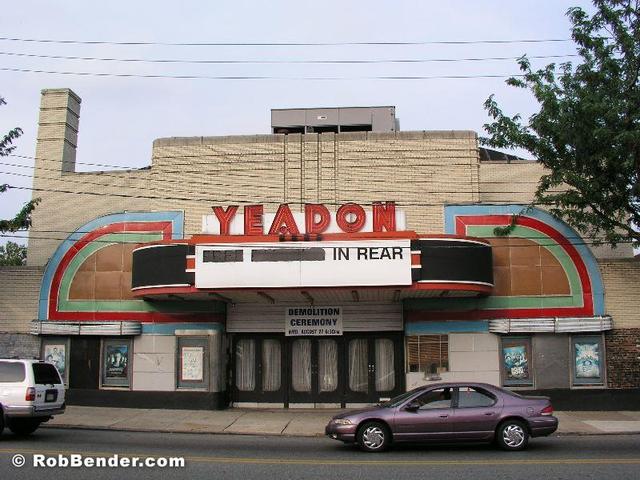 Relatives of the Milgram family, who operated the Fox, Milgram and Stanley in Philadelphia were the most recent operators. Theater had deteriorated quite a bit in recent years.

In October 2002, residents began rallying in support of the theater in an effort to persuade the town to resurrect the old Yeadon as a performing arts center. The city purchased the theater in December 2001 for $125,000.

The Yeadon Theatre was heavily damaged by a fire in January 2006 and was demolished later that year.

It is most certainly demolished. All that remains is a neatly groomed square of land, ready for redevelopment. However, a little closer inspection of the gravel unveiled several chunks of ceramic facade material which will now make their way to the Theatre Historical Society’s archive in Elmhurst. IL. Not sure if any effort was made by the local preservation groups to save any major ornamental details. From the photos listed here, it looks to have been a really nice house. Such a shame for the people of Yeadon.

Very sad to read and see that this theatre has been destroyed and that it had a fire. And yes, such a shame for the people of Yeadon to have lost this special art deco theatre! So nice to read that several chunks of ceramic facade material will make their way to the THS archive in Elmhurst, IL.

Look closely at this photo of the site of the demolished Yeadon. Note the building to the right of the photo, the Yeadon FIRE DEPARTMENT!
View link

A happy discovery among the rubble – bits of the Yeadon facade:
View link

From the ages 10 thru 13, I cannot count the number of Saturdays I spent at the Yeadon Theatre. Even later on, Rhea kept a lot of the old features, including a nickel soda machine. I went there once in the 70s and 2 inebriated young men were sitting a few rows in front of us and being loud and inappropriate. In the middle of the movie, they stopped the film, turned up the lights and Rhea came down the aisle with 2 Yeadon policemen and escorted the 2 rowdy’s out of the theatre. We all applauded and then settled back down to watch the rest of the movie. She was a gem. I lived in Lansdowne Park and we used to climb over the gate of Holy Cross Cemetary to cut through to the other gate for a short cut to the theatre. The last movie I saw there was “Superman” and the place was packed. Sweet memories.

Thanks for posting the photos. I spent a few times in the Yeadon Fire Hall for little league sports banquets. Anyway, it is so sad to see that the theater is gone. My father took me to my first movie in that theater while growing up there. My father has since passed away, so it is even more saddening to see the theater gone. Mira, that’s great that you remember Rhea. I myself don’t remember her, but I have heard amazing things about how she ran that theater.

Boy,you are right Chuck,A nice theatre,noticed “THE VERDICT” playing might have been taken around the Christmas holidays.

iam sadly to imform you that most of you knew what i already suspected the yeadon theatre is gone!! erased no marquee saved nothing, just a vacant lot just memories!! if you go to google maps click on the address and youll see a green field empty lot!!! another theatre lost to time MORE the reason to SAVE the BOYD and LANSDOWNE and other theatres our cinema treasures

I saw a re-release of “Gone With the Wind” at the Yeadon on 8/13/70. I remember the owner serving coffee and doughnuts to her patrons in the lobby. I also remember the old-fashioned curtains that creaked open very slowly to reveal the screen.

The last movie I saw there was Independence Day. It was a couple of dollars to get in so I treated my whole family my Mom, sisters, my kids, nieces and nephews. It was great! Good times.