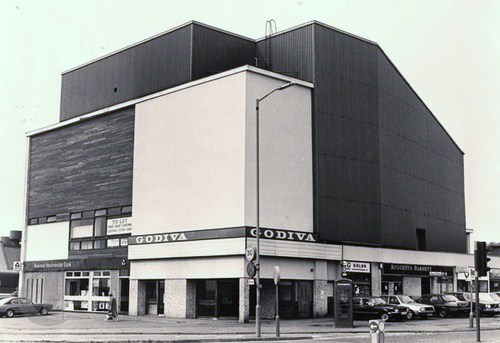 Located in the Tile Hill district to the west of Coventry city centre, at the corner of Fletchamstead Highway & Tile Hill Lane. The Standard Luxury Cinema was named after the Standard motor car works opposite. It was opened on 11th July 1938 with Edward G. Robinson in “Kid Galahad”.

Built by Augustus Pell, it was designed by architect G. Cave in an Art Deco style. It was a rather tall building, faced in white cement. Inside the auditorium there were troughs across the ceiling containing concealed lighting. Seating was provided for 1,350 in stalls and a very steeply raked circle. The proscenium was 35 feet wide, and the stage 20 feet deep. There were three dressing rooms. It was equipped with two Kalee 11 projectors and GB sound. It was also equipped with a Jardine 2Manual/5Ranks organ.

The Standard Luxury Cinema was closed on the 14th November 1940, when the power supply was cut off due to heavy German bombing raids on the city. The electricity supply was restored on 29th November 1940 and the cinema re-opened.

In 1947, it was purchased by Neville Dent of the Denton Cinemas circuit. The Standard Luxury Cinema was the first in Coventry to have CinemaScope installed on 10th November 1954, although the film shown on that day “Casanova’s Big Night” starring Bob Hope was not a CinemaScope film!

Re-named Godiva Cinema (after the city’s famous naked lady), it re-opened on 18th March 1967 with Rex Harrison in “My Fair Lady”, presented in 70mm with six track stereophonic sound, and projected onto a 48 feet wide screen which was 21 feet high. The Godiva Cinema was closed on 4th September 1976. It was converted into a bingo club, which operated from December 1976 until closing in 1981.

The building was then put up ‘For Lease’ as a possible entertainment centre. It was re-opened in June 1990 as the Rubicon Casino, and by 2009 was operating as Maxim’s Casino. By 2017 it was in use as a church.

One I never got to get into, but remember the Chief very well, when she visited my cinema in Banbury one day, along with our area technician.

I visited the box once. The only thing I can remember is that to get the masking from WideScreen to CinemaScope, you had to go out to 70mm first then come back in! I saw mamy 70mm films there when I lived in the area, along with the Regal Leamington.

The former cinema is now occupied by the Winners International Coventry church since early 2017. Shops around the outside have been retained.

My uncle (and his younger sister, my mum) worked here before he owned The Palace. I’m looking for interior photos, if anyone can point me in the right direction, I’d be much obliged.

If only that horrible metal cladding could be removed. The building would have a much more appealing street presence that way..

Advertisements for the grand openings in 1938 and 1967 have been posted.