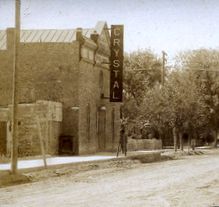 The earliest newspaper listing for the Crystal Theater I can find is from 1913. It was renamed Broadway Theater in 1918 and closed in 1923. An article from 1946 notes that the building at that time had been serving as a “beer hall” for fifteen years. The postcard view above dates from the 1910’s and the words “Opera House” can been seen inscribed on the building behind the vertical sign.

The March 1, 1918, issue of The Deming Headlight said that the former Crystal Theatre was being remodeled and would soon reopen as the Broadway Theatre, presenting stage attractions.

About this time, a new theater called the Majestic was built on North Gold Street. In August, 1921, the Majestic, which had been showing movies twice a week, was destroyed by a fire. Its operators leased the Broadway Theatre and converted it to a movie house.

The Broadway Theatre is mentioned regularly in the newspaper into 1923, and then drops from sight except for an ambiguous mention in 1933, and a passing reference to the “old Broadway Theatre” in 1937. It’s likely that it was closed in 1923.

For a brief time in 1918, Deming had five theaters in operation: the Broadway, the Majestic, the Teal, the Princess, and the Isis. The only one which had a long life was the Princess, which was taken over by Griffith Theatres in 1936. I’ve been unable to determine for certain, but I believe the Princess was remodeled and became the Luna Theatre, which opened in November, 1936, and operated at least into the late 1940s. Deming also had a theater called the Pastime, but I’ve been unable to determine when it was in operation.

The earliest mention of the Crystal Theatre I’ve found in the local newspaper is from early 1912, in an item noting that a concert had been held there the previous Thanksgiving. I suspect that prior to that it was still being called the Opera House, though the name Opera House is also mentioned in 1912 and 1913, so there might have been more than one opera house in Deming, or the names Crystal Theatre and Opera House might have been used interchangeably.

One item gives the name of the person managing the Crystal Theatre in 1912 as George L. Shakespeare, but I suspect that it was actually being managed by Jack Bacon or Tom DeVere.