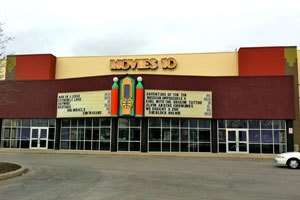 The Movies 10 opened on January 17, 1997. This is a Cinemark theatre. Amenities include RealD 3D, digitial presentation, self service ticketing and online ticketing. It was closed January 22, 2017. It was taken over by Zurich Cinemas with investment by Dipson Theatres and reopened in August 18, 2017 as Movies 10.

This was a second-run dollar theater back when I lived in Rochester (mid-to-late 90’s) and I basically lived there on the weekends, sometimes catching as many as three movies at a time. The place was in decent shape with nice projection and comfy seats. The crowds could be obnoxious so I was careful about what I went to see here: horror and action films were usually fine but this was not the spot to catch an artier film as the audience would often revolt and boo and throw things, etc. Had a great time watching such high-brow fare as Jason X, Fallen, Godzilla, Halloween H20, The Corrupter, etc. — Jason X being a particular favorite as this big dude down front kept yelling stuff like “Oh no, look out, you gonna die!” with everyone laughing around him. It’s funny what you are willing to put up with for a buck! If I’d paid full-price, I would’ve been annoyed with the audience but somehow they only made the experience there more entertaining.

Not sure what the status is with this place now. Dollar theaters are closing all over the country. There certainly is no discount second-run place left in NYC, which has contributed to a drastic drop in my movie consumption.