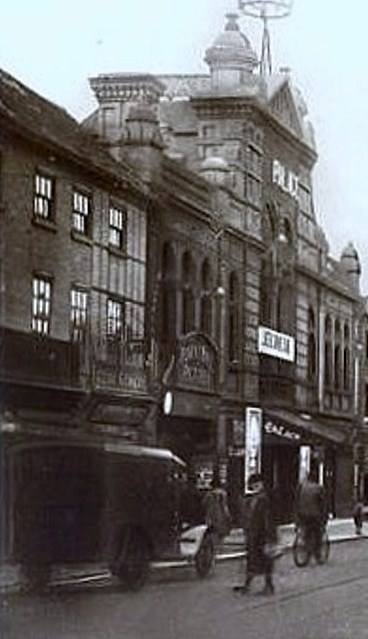 Built on the site of the Floral Hall, the Leicester Palace Theatre of Varieties was opened on 17th June 1901 with a variety bill headed by strongman The Great Sandow, and George Coburn (famous for his song ‘The Man Who Broke the Bank of Monte Carlo’). It was part of the chain of variety theatres operated by Oswald Stoll.

Designed in a splendid Moorish style by noted theatre architect Frank Matcham, seating was provided in orchestra stalls, pit, dress circle, balcony, gallery and boxes. The proscenium was 33 feet wide and the stage 63 feet deep. The theatre was equipped with a projection box containing an American Bioscope, which was used as part of the programme from opening night.

In 1931, the theatre was equipped with a Western Electric sound system and converted into a ‘talkie’ theatre, with seating reduced to 1,883 by closing off the gallery. It remained a full time cinema until 1937, when an ice rink was installed on the stage revolve and two ice productions were staged, with the full seating capacity re-instated. From 1938 until 1946, it returned to full time cinema use.

It had been taken over by Prince Littler after the death of Oswald Stoll in 1942. Variety and revue shows continued, with stars such as Max Miller, Joan Regan, Benny Hill, Frankie Vaughan Harry Worth, Roy Castle and Bill Maynard topped the bill, and shows like “Soldiers in Skirts” and the play “Dracula” staring Bela Lugosi retained a good audience.

By the mid-1950’s, productions such as “Les Nues de Paris (The Nudes of Paris), "Un Nuit d'Amour”, The Phyllis Dixie Show" and “Les Folies Parisiennes” followed in quick succession, and audiences began to dwindle.

The Leicester Palace Theatre was presenting “She Strips to Conquer” when it was announced that the theatre would close on 21st February 1959 after a weeks' run of the musical “The King and I”, which played to a packed house of 3,000 on closing night. The contents of the theatre were auctioned off, and it was demolished within weeks. A parade of shops was built on the site.

An old picture of the Palace.